John Battelle is interviewing both Chris DeWolfe, co-founder of MySpace, and Edgar Bronfman Jr., chief executive of Warner Music Group, on the future of music. They all agree that music is going to be social, and that will lead to monetization of something that has heretofore been pirated.

“When will MySpace Music have a leader?” Battelle asked, referring to the Fox-owned company’s long search for a chief executive of its MySpace Music division. DeWolfe made an offer after interviewing 40 people. He said he expects to make an announcement soon. He wouldn’t reveal more, but said the job was hard to fill because the person had to understand music, technology, and the social web as well. Battelle mentioned that rumors suggest that Courtney Holt of MTV will be named as the chief of MySpace Music shortly. 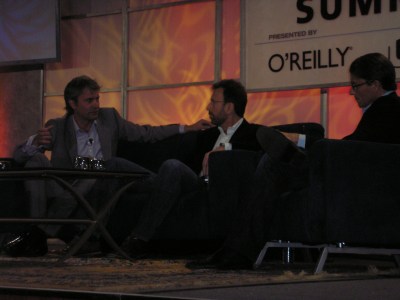 Battelle asked if Warner Music was different from other music companies on protecting its music from being copied. Bronfman said focusing on innovation rather than litigation was the right approach and to do it in a way that could monetize the music. About 20 percent of Warner’s revenues are coming from digital.

“Until MySpace Music came along, there wasn’t a whole ecosystem available,” Bronfman said.

“Who makes money from iTunes when you buy a song?” Battelle asked. “Apple makes money, and they deserve to make money,” Bronfman said. “There is no one channel that will replace the CD. Artists make money, Apple makes money. But it will take a whole series of business models and channels. Most of the revenue will not come from the physical CD sale, and potentially even the download.”

DeWolfe said Myspace wanted to pay the music companies, pay the artists, and serve the users so they wouldn’t have to go out and steal music. It has a streaming service and a store, as well as ads. DeWolfe said MySpace’s starting point is that it is already a place for music discovery. Once that music is discovered, it should be easy to go ahead and purchase the music, he said.

That’s the difference between going to a bookstore and not knowing what to buy, and then going to a friend’s house and then getting a book from the friend, DeWolfe said.

“Give me your honest opinion of Apple?” Battelle said to Bronfman.

“Besides that stuff,” Battelle said.

“At the end of the day, like it or not, Apple has earned its success,” Bronfman said. But he said MySpace Music is far different from iTunes because of the difference between selling goods online and discovering music online. Bronfman said the number of channels is multiplying fast, making marketing difficult. Bronfman said the value add of a music label is its “editorial voice,” which takes a raw talent and molds it until it is fully formed.

DeWolfe said the launch of MySpace a month ago went great. About 80 million playlists have been created, 5 million bands are using MySpace to upload music, and there were a billion streams of music in the first few days. The goal is to become profitable very quickly, DeWolfe said. Sponsors include Toyota, McDonalds, Sony and others, each buying ads. The download store is free of digital rights management.

“Would MySpace create a device for listening to music?” Battelle asked. It’s possible, but MySpace is focused on things like events in the real world for discovering music, DeWolfe said.

Bronfman said that it took a long time for the music industry to see the value of distributing music without digital rights management for promotional purposes, and to encourage users to make legitimate purchases rather than pirating songs.

“The world changed,” Bronfman said. “Media became social media. I would like a world where DRM was secure and trackable. But that world doesn’t exist.”

To monetize music, Bronfman said that the industry has to find a way to do that without asking people to pay each and every time they want to use music on a particular platform or device. It makes no sense, he said, to buy a song for something like an iPod and buy it again for a Microsoft Zune media player.

Asked if MySpace is worried about Facebook’s growth, DeWolfe disputed that Facebook was catching up. He said MySpace has 75 million users in the U.S., versus 40 million or so for Facebook, according to comScore. He said that Facebook started as a really good way to connect to people with a good address book, while MySpace is a way to express yourself and discover new friends and find culture. He isn’t worried about Facebook going after music because MySpace has five million bands on its site.

Bronfman said the world is moving to a more and more open approach to music.

“We have to make that world work for artists and ourselves,” Bronfman said.