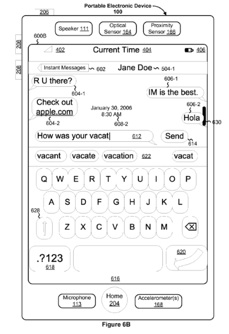 Financial analyst Jim Cramer went on a rant about the strength of Apple’s stock today during CNBC’s “Stop Trading” segment. That in and of itself it not interesting, but one specific thing he spoke about was: a new Apple product called Conversation.

Cramer claims this product will revolutionize instant messaging the way Apple revolutionized the portable music industry with the iPod. Normally, one might just brush these comments aside as speculation or sheer lunacy. However, a patent, uncovered by AppleInsider today also points to advanced work Apple is doing on the instant messaging front — for the iPhone. This patent could be in line with an earlier rumor started by Digg founder Kevin Rose, that the 3G iPhone would have advanced IM capabilities.

Not everything lines up perfectly. While Cramer calls Conversations a product, the patent and Rose’s rumor indicate only a new piece of software for the iPhone (though presumably a newer 3G iPhone). Still, when there is this much information swirling around close to an Apple event (Apple’s WWDC is in June), from different sources, and it’s all about the same thing, I certainly would not bet against an Apple move into mobile instant messaging in the near term.

An iPhone with instant messaging and/or video messaging would further extend the appeal of the revolutionary device. However if such an application is the reason that Apple is restricting developers from creating applications that run in the background with the iPhone SDK, expect some backlash.