Hootsuite founder and CEO Ryan Holmes is a passionate advocate on the topic of why executives need to be active on social media. But for a brief moment this year, he became a case study in how that can go wrong.

Since then, Holmes has been trying to be an example of how to respond and recover from a very public embarrassment of his own making. But it turns out that for Holmes, this public pratfall was far from being the most difficult moment during his tenure as CEO.

During an interview this summer, Holmes said that there have been lots of tough calls he’s had to make behind closed doors as he tries to fulfill the lofty expectations facing one of Canada’s most notable startups. Chief among them: having to overhaul his entire management team when the company’s growth was stalling two years ago.

“I loved that team that got us to that level,” he said. “So it was hard as a leader to say you’re not the people to get us to the next level.”

Holmes was in Paris this summer for the Viva Technology conference where he was talking about Hootsuite as well as the publication of his new book, The 4 Billion Dollar Tweet: A Guide for Getting Leaders Off the Social Sidelines.

The title refers to a tweet from President Trump about cost overruns for new presidential planes that briefly wiped about $4 billion off the market cap of Lockheed Martin. Holmes’ message is that executives cannot afford to ignore the conversation happening around their businesses and brands on social media. Rather, they need to be active participants. 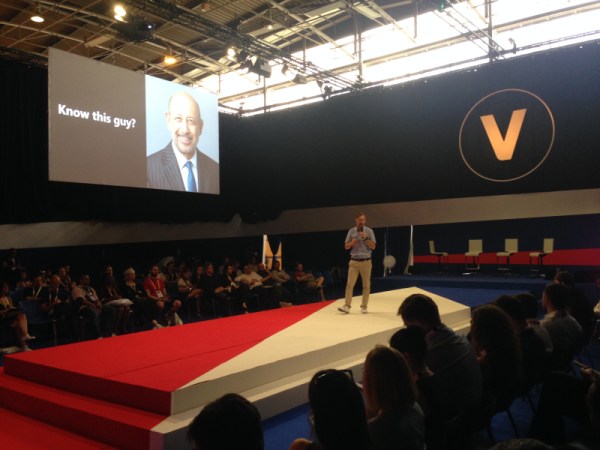 Holmes has always practiced that mantra by developing his own strong presence on social media. However, he found himself on the wrong side of this equation in February following the publication of a Bloomberg story that challenged the valuation of Hootsuite.

Hootsuite was founded in Vancouver in 2008 as the era of social media was coming into full bloom. Hootsuite offered a platform for people and companies to manage their social media presence across the rapidly expanding and evolving landscape of social media services.

Hootsuite was hot and has raised $246 million in venture capital. Because it was based in Vancouver, it gained extra notoriety in a country hungry for its own startup success stories. Unconfirmed reports had the company riding that momentum toward an IPO, possibly this year.

Then in February, Bloomberg published an article under the headline “Hootsuite: The unicorn that never was.” Hootsuite had a reported valuation above $1 billion after its last round of VC in 2014. The company had neither confirmed nor refuted this. Bloomberg cited sources saying the real valuation was between $700 and $750 million, and implied that Hootsuite executives had been somewhat deceitful about the issue of valuation.

That prompted this now infamous exchange on Twitter between Holmes and the reporter:

it's never a good time for tech ceo's to be sending tweets like this, but this is a particularly bad week https://t.co/ik5OgCVJRo pic.twitter.com/yU8Yg4H39t

“I’m not proud of this,” he said on stage at Viva Tech. “It was something rash I did.”

Cue social media backlash, made all the more fierce because the culprit, Holmes, was head of a social media company and thus should have known better. “It’s an example of what happens when it goes wrong,” he said.

Holmes later apologized for the tweet. He said that was the most important thing he learned from the incident. “Own it,” he said. “And when you need to apologize, apologize.” If there is good news, it’s this, according to Holmes: “The news cycle moves on. It does pass.”

Apologies on an attempt at humour today. It was offside.

If there was another disappointment for Holmes, however, it was that the personal misfire overshadowed the renewed success of Hootsuite. The company has been making big inroads among corporate customers, which has reignited its growth. And it can boast of new partnerships, like the one announced this week to integrate Hootsuite with Adobe’s Creative Cloud.

It’s a big turnaround from 2015 when it seemed the Hootsuite growth story had hit a wall. Holmes recalled that the company had fallen short for a couple of quarters on its own sales targets. The company was losing out on deals to larger customers and wasn’t seeing current customers expanding use of its product.

“I had an executive team that got us to here in seven years,” he said. “It’s very few people that could do that. But what I realized after we missed a couple of quarters is that I don’t know that we’ve got the right people at the table. The playbook was used up.”

So he cleared out the executive ranks and started building a whole new team. That also included laying off 65 employees, which led to another brief moment of social media infamy for Holmes. On Instagram, he posted a picture of his hand holding a drink with the caption: “Cheers to my homies.” What was intended as an homage to the ex-employees was blasted for being insensitive before he took it down.

Still, the overhaul soon paid off. The new executive team included a handful of top names with deep experience in tech and digital media, including a new chief marketing officer who had worked at Juniper Networks and Macromedia; a new chief financial officer from OpenText, Canada’s largest publicly traded software company; and a new head of sales who had worked for 20 years at companies such as SAP.

Hootsuite began ramping up integrations with new services, such as Dropbox. It introduced new pricing packages to target enterprise users. It made some targeted acquisitions. It launched a $5 million developers fund to extend third-party applications for its own platform. And it began focusing even more on international expansion, including opening new offices in Sydney.

By the middle of 2016, the company said it was cash-flow positive. “We’ve come out the woods in a really good position,” Holmes said.

“The industry is growing up and budgets are growing,” Holmes said. “Brands’ understanding of social has come a long way.”

And that was the main message he had in Paris this summer: Executives and brands need to get in the game.

In a sign of just how fast things continue to evolve, Holmes has speculated that the title of his book may already be dated by recent events. Last week, in a random rant, President Trump tweeted:

Amazon is doing great damage to tax paying retailers. Towns, cities and states throughout the U.S. are being hurt – many jobs being lost!

That temporarily sent Amazon’s stock tumbling, wiping out about $6 billion on market value. Bad news for Amazon. But it does nicely serve to emphasize Holmes’ message about why the financial impact of social media is only going to escalate from here on out.