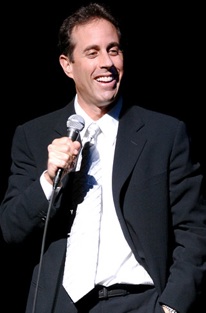 I can hear it now: What is the deal with Apple? They don’t sell Apples. Why call themselves that? … Yes, ladies and gentleman, Jerry Seinfeld is Microsoft’s new pitchman.

Microsoft is still being very secretive about its new $300 million advertising campaign that it plans to unleash shortly, but Seinfeld will play a key role in it, the Wall Street Journal has learned. He apparently will appear in commercials alongside the recently retired (but apparently not-so-retired) Bill Gates. And he’ll supposedly earn $10 million for his troubles.

But what’s the campaign trying to do?

The plan apparently somehow revolves around the phrase “Windows Not Walls,” Windows of course being the name of Microsoft’s operating system. Though Windows is still utterly dominant in terms of market share, the latest iteration, Vista, has been taking a lot of heat in the press as being a failure. It’s so bad, that I think I hear more talked about Windows 7, the name of the follow-up version, not due for a couple years, than I hear talk of Vista now.

Microsoft’s chief rival in the computer world, Apple, hasn’t been helping Vista perception any with its popular “Mac vs. PC” television commercials. The ads depict a young, fresh-faced geeky-hip kid playing the role of Mac versus a portly, older geeky guy playing the PC. Since Vista’s launch last year, almost all of these ads portray Vista in a bad light.

As I’ve stated before, I was pretty impressed by ad agency Crispin Porter + Bogusky taking over Microsoft’s account, as related in Fast Company. They have a track record that suggests they can turn Microsoft’s public image around. (And it should be noted that Microsoft needs no help turning its actual business around; each quarter it seems to rake in more money than the last.)

So will Seinfeld turn the tides?

Well, if Microsoft simply plans to do a play on “Mac vs. PC” using Gates and Seinfeld, that may be funny once, but then it will likely just look pathetic and rather odd. There’s no indication they plan on doing that, and I hope they don’t. Seinfeld was funny in pointing out the everyday nuances that most people miss, and that’s what made the show bearing his name a hit in the 1990s. But that show has also been off the air for over 10 years now. Can he still relate to a massive audience?

Microsoft is apparently willing to pay millions to find out. Expect the ads to start around September 4.