Apple recently started seeding to developers the second beta version of its 2.2 software update for the iPhone and iPod touch and it’s becoming more clear what will be included in the update. (The first beta included a slightly different version of the Safari web browser.) Right now, it looks like the key new features focus on the Maps application which is built for the iPhone by Google.

With the update, users will be able to get public transit directions on their devices. This includes not only bus, subway and train routes, but also walking directions as well. Maps will also now feature Street View, the area which allows you to virtually walk through the streets with real images being shown to you. This was added to other versions of Google Maps for mobile recently, and is included in Google’s Android mobile platform.

The blog iPhoneYap.com was able to grab a bunch of pictures of the new features (below), which also apparently includes a way to send your currently location to friends. While this may sound interesting, and may raise the alarms of several location-based apps out there (like Brightkite, Loopt and Whrrl to name a few), it appears this data will only be sent via email — which seems pretty pointless as you could very well be gone from a place when the person reads the email. Now, if only the iPhone had an IM program that could run in the background…

You can likely expect a range of other new features and fixes before Apple officially launches the 2.2 update. The 2.1 update in the first part of September fixed many issues users were having with the device. 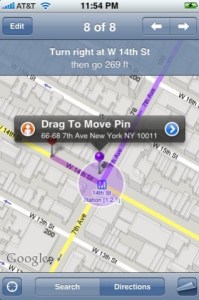 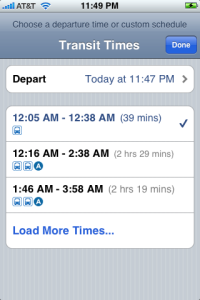 Also noteworthy for future iPhone updates is a survey that AT&T recently sent to its customers asking them to rate a level of interest in new potential services for the device. While this list probably has nothing to do with Apple, as AppleInsider points out (it more likely just for AT&T’s own use), it does include some interesting features that people have indicated they want on the device: 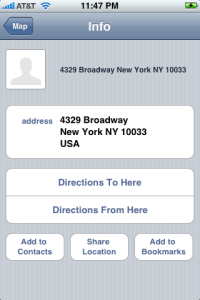