Facebook has a growth problem: It’s running out of room. So it’s shelling out $16 a head for its next billion users.

In North America, everyone — you, your college buddies, your mom, your teacher, your boss — is on Facebook. The social network is running out of fish to catch.

In order to keep growing, the company has had to aggressively extend its reach outside of the U.S., Canada, and most parts of Europe.

It’s focusing on SMS and mobile web technologies for the “dumb” phones that are prevalent in developing markets. It’s focusing on bringing Internet access to places where it doesn’t yet exist. Since a lot of areas only access the Web via mobile phones, it’s making big investments in mobile-only users and is on its way to becoming a mobile-only company.

And as of today, it’s plain buying its way into new markets.

WhatsApp, which the company bought today for a jaw-dropping $16 billion, is a mobile messaging platform that has struggled to assert itself in North American markets. It’s even behind BBM in the U.S. But Facebook isn’t shutting WhatsApp down — because why would it close a wide-open door to its next big opportunity?

Here’s our thinking: WhatsApp users aren’t going to automatically become Facebook users. But Facebook is going to gain a massive amount of business intelligence on how international users think, what features they need and use, what their bandwidth requirements are, what devices and platforms they use, and even exactly who and where they are.

And that kind of intelligence is something Facebook has been working hard to get.

“We want to give everyone in the world the power to share,” said Facebook CEO Mark Zuckerberg in a recent phone call.

“The big question for us is, which areas are growing the fastest? … Whatever the form factor is going forward, we’ll be able to deliver.”

That form factor, as you may have guessed, revolves around mobile, the WhatsApp wheelhouse. Nearly 300 million users only access Facebook from their phones or tablets. The mobile-only crowd has doubled since this time last year — that means international growth.

A Facebook rep said to VentureBeat on background that, while most people in the U.S. market don’t know how big WhatsApp is, the service is gaining a million users a day — and those users are from all around the world. Part of that is because the service is lightweight, simple, easy, and intended for use worldwide.

Zuckerberg, the rep said, believes WhatsApp is on a path to reach a billion people, but it’s a different billion people than Facebook reaches. But because there’s not so much overlap, the companies are well positioned to help one another, our source said.

Let’s get visual: Here’s a look at Facebook’s growth around the world: 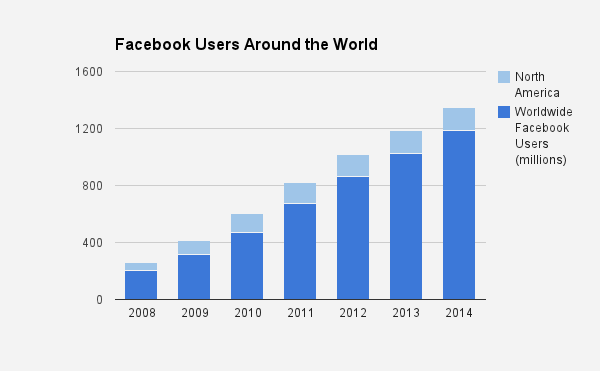 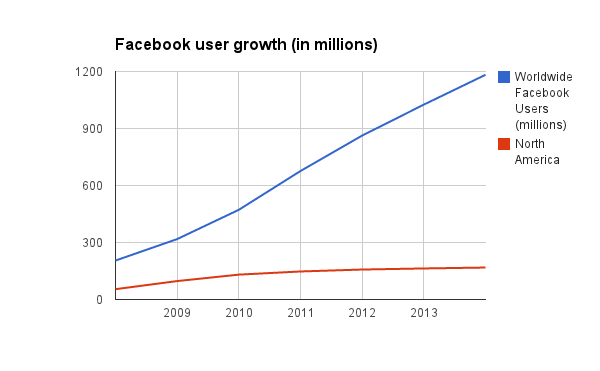 As you can see, North American growth has pretty much tapered off. All the opportunity lies in other markets around the world.

Check out the growth in the Middle East/Africa region as well as Indonesia (it’s worth it to click to see the larger version):

If you follow the money, you’ll see that Facebook knows where it still has room to catch more users and sell more ads. These regions are its areas of highest growth — and growth potential. But some of these areas, such as China, are untapped by Facebook and well known to WhatsApp.

Imagine if Facebook had a clue about how to woo 26.3 percent of the population in China. Or India.