In an ongoing effort to curb the spread of erroneous information, WhatsApp has revealed that it will now limit the number of chats you can forward a message to.

The move comes following a series of violent lynchings that were triggered by the spread of false information through the Facebook-owned messaging app. In the wake of those events, WhatsApp unveiled a new feature that flagged received messages as “forwarded.” 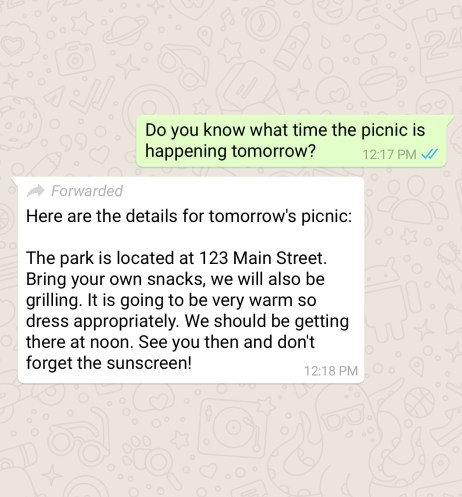 The company’s latest initiative should have a more direct impact on the spread of fake news, given that it vastly reduces the number of  people you can forward a message to.

From this point on, you will only be able to forward a message to 20 chats at once. But if you are in India this will be limited to just five chats. It’s not entirely clear whether a user will be able to go back into the message afterwards and forward it to another group of people, but we will update here when we hear back from WhatsApp.

Additionally, users in India will no longer have the little “quick forward” button next to messages that contain a piece of media, such as a photo or video.

Though WhatsApp is calling this update a “test” for now, it seems likely it will keep the restrictions in place, given the growing criticism being leveled at Facebook’s entire suite of products. A U.K. documentary earlier this week shone a light on Facebook’s dubious content moderation practices, while representatives from Facebook, YouTube, and Twitter faced Congress in the U.S. to answer questions about how it manages the spread of far-fetched conspiracy theories.

Put simply, the knives are out for Facebook and other social networks, so they need to demonstrate that they’re doing something meaningful to halt the spread of fake news.