[Editor’s note: With the iPhone and Google’s Android dominating media attention in the mobile space, it’s only natural to start drawing comparisons. Applications represent a prime arena for such a competition, except for one thing — Android doesn’t even come close to rivaling the iPhone when it comes to app offerings. Below, ad network executive Rana Sobhany, explains why Google seems to be dragging its feet.] 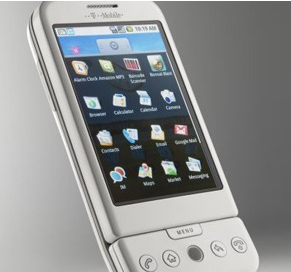 At this point, it’s safe to say that no one anticipated how large the download numbers would be for Apple’s App Store 150 days post-launch. But VentureBeat’s post on Friday about Apple hitting the 300,000,000 application download mark, quickly transitioned to an entirely different conversation in the comment section, shifting the focus away from iPhone metrics and onto the side-by-side comparison of applications built for the Android platform during the same time period. The App Store launched with over 500 applications; Android with 62. Now, over one month into Android Market, we have yet to see even 500 Android applications available for download, with the most recent analysis placing total count at just 472.

The promise of Google’s Android Market was that it would be dramatically different than Apple’s approach to distributing mobile software. Google created a transparent “Market” rather than a “Store” so as to convey a sense of seamless exchanges without clandestine qualifications for entry into the ecosystem—as some developers reportedly feel about Apple’s approval process. Additionally, there are far more developers who are capable of applying their existing Java skill sets to creating applications in Android’s Java-based environment than in Apple’s CocoaTouch environment. On the surface, this would also seem to predict more Android applications on the Market than on the iPhone App Store.

If the openness and lack of approval restrictions on the Android platform were meant to be a refuge for disenfranchised iPhone developers who felt punished by an opaque approval process and if there are so many bright developers able to create software for the platform, then where are all the Android apps?

The iPhone was on the market for 18 months before the first Android handset — the G1 on T-Mobile’s network — was available. Developers have long been able to create third-party applications on their iPhones by jailbreaking them and writing software against unpublished application programming interfaces (APIs). As a result, by the time the official iPhone SDK was released by Apple, there was already an inspired community of experienced developers ready to start cranking out brilliant apps. T-Mobile has a much smaller subscriber base than AT&T, and handsets were not readily available to test applications on until late October of this year. Prior to that, developers had to rely solely on feature-restricted Android simulators for crafting the complex applications they were making.

Developers know that all shipping iPhones have GPS, an accelerometer, pinch and tilt capabilities — the unique combination of features that makes an iPhone an iPhone. Since Android is strictly a mobile operating system designed to span myriad device form factors, developers are forced to consider what may be significant variances between phone features when building their apps. The second Android device — the Kogan Agora — was released in Australia last week with no accelerometer. This week’s announcement of a QIGI’s Android device in China showed an even more restricted feature set. 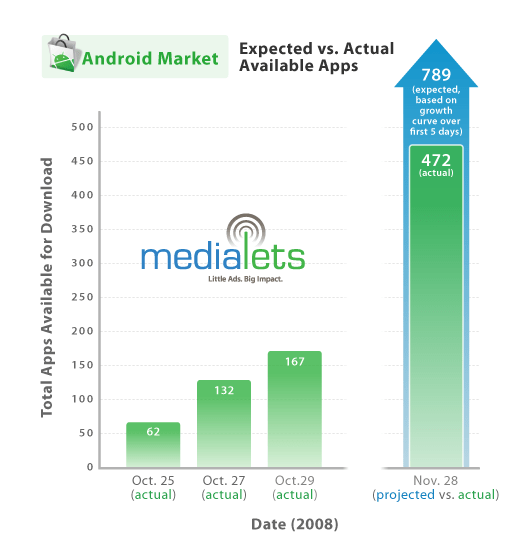 To illustrate the effects of these challenges, I’ve put together a simple chart (above) indicating the predicted growth of Android Market based upon the first three days. The results are striking. Assuming a linearly decreasing growth rate of about 50 percent calculated every two days (based on the results of the first five days), the results indicate that by today, Android Market should contain at least 789 applications, almost twice the current figures.

But this is only a piece of this equation. The lack of a payment model for applications available in Android Market may be a deterrent to developers, who are delaying the release of their apps until the first quarter of 2009 when Google implements their payment system. Additionally, the Open Handset Alliance yesterday announced 14 new partners, including Sony Ericsson and Vodafone, noteworthy members who will add considerable strength to the adoption of the platform, both in the U.S. and internationally. Carriers who are not selling the iPhone need a strong, competitive response, and Google’s Android is a very attractive alternative.

While there is currently significantly more reach on the iPhone, the app marketplace is crowded and discovery of new applications is already difficult. Google, which has strong incentive to own the mobile experience and the Android platform, as well as the applications built atop it, will continue to grow and evolve its offering with each new device and operating system version. The earliest apps in the iPhone App Store fill the ranks of the top download lists, and those positions have yet to be secured on Android. This is a great opportunity for developers to push the boundaries of what can be done on the platform and build creative apps that break out as hits — before Android Market becomes overcrowded with tip calculators and lighter apps.

Rana Sobhany is VP of Marketing at New York-based Medialets, a premium advertising network and analytics provider for mobile platforms such as iPhone and Android.