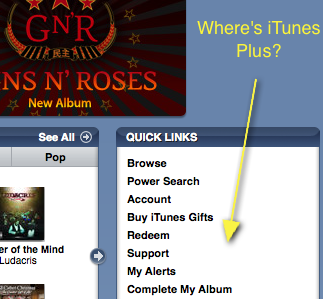 When Apple refreshes the iTunes store onTuesdays, I feel like a kid in a candy store. Each Tuesday, it adds new music, new movies and new deals on content. But today’s changes may have signaled the start of something much bigger: A revamp of iTunes Plus.

iTunes Plus is the name Apple gives to its digital rights management (DRM)-free tracks within the store. These tracks are shown both by a plus sign next to track listings and in a special iTunes Plus area of the store that, until recently, showcased some of the music being sold DRM-free. But now, that area seems to have vanished. Or at least, it’s not in the easily accessible place it used to be (in the upper right hand menu).

I did find the area after a power search, but it’s certainly not easy to find like it used to be.

This disappearance alongside reports of certain iTunes Plus tracks being available from music labels that previously didn’t offer iTunes Plus tracks, makes it seem as if Apple is gearing up to relaunch the area — or perhaps the entire store — with a lot more DRM-free content.

When Apple unveiled the iTunes Plus area of the store last year, it was met with much praise as Apple was unchaining the music it sold from the iTunes store and iPod (music without DRM can play anywhere). EMI was the only major music label at the time that agreed to sell these iTunes Plus tracks, but Apple chief executive Steve Jobs promised that by the end of 2007 over half of all iTunes tracks would be DRM-free. That time period came and went, and even now, some 18 months later, Apple has failed to meet that goal.

Meanwhile, its main rivals, including Amazon, have all of the major music labels selling DRM-free tracks in their store. While that hasn’t hurt iTunes’ sales yet (it is now the number one music retailer in the U.S.), in the future it could be a problem as people start understanding what DRM actually means for music they thought they owned and could do anything they wanted with.

But reports began to surface recently that Apple was in talks with the other major labels about bringing their tracks to iTunes Plus as well. And now, if the report by Distorted-Loop.com is true, Universal, Warner and Sony all have tracks being sold minus DRM. (I haven’t yet been able to find any of these tracks, but their report also seems to be talking about the UK store, which I don’t have access to.)

Could we see a fully DRM-free iTunes store in time for the holidays? I hope so — though my bank account might not be so jolly.

Update: A MacRumors forum member, Gary Gerbrandt, from Canada noticed some Warner and Sony iTunes Plus tracks late last week as was able to grab screenshots. Still, no official word from Apple yet.