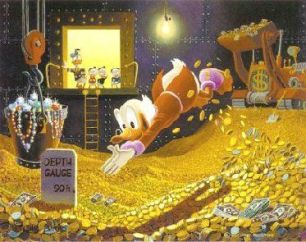 Making videos for YouTube can be a legitimate source of income for the most popular users, some of whom can bring home the bacon with their creations — six figures worth of bacon. At least that’s what the New York Times is reporting.

It’s been a year since Google-owned YouTube invited users to join its partner program and add advertising to their videos. Big media companies like Lions Gate, Universal Music Group, Sony BMG and CBS are among these partners, but now, even individual users are able to quit their day jobs and make videos full-time.

The Times piece focuses on Michael Buckley, host of the celebrity comedy/commentary show What The Buck, who says he is earning over $100,000 from YouTube ads. When his cousin started posting segments of Buckley’s public access TV show to YouTube in 2006, he never imagined that his celebrity rants would bring in 100 million views just two years later (and an HBO deal to boot). YouTube’s most-subscribed creator, with over 700,000 subscribers, is Fred, a teenager who poses as a hyperactive, angry six-year old perpetually under the influence of helium. How do you like them apples? Seriously, tell me how far you get through this video:

A Google spokesman was vague about how much money these videos are making, saying only that “hundreds of YouTube partners are making thousands of dollars a month.” So that’s not exactly a lake of gold for Scrooge McDuck to swim through, but it suggests YouTube is making progress on the revenue front.

The site positions the ads in and around its partners’ videos and shares the revenues with creators. It has been difficult for Google to profit from videos because a majority of them are uploaded by users who probably don’t have copyrights to their material. As a result, only about 3 percent of videos on YouTube are supported by ads due to copyright concerns. However, using technology called Content ID, YouTube can scour videos and identify protected material. Copyright owners can then choose to monetize the unauthorized uploads (Google says 90 percent of its partners choose to do so).