It seems that barely a day goes by now without a new rumor surfacing about the next iteration of Microsoft’s Windows operating system, smartly dubbed Windows 7 (it will be the 7th major version of the software). Today brings word that the new OS is on track for a 2010 release. Why is there so much talk about it this far out? Is it because users are eager for a follow-up to Windows Vista, or is it because Microsoft is?

Microsoft is the one that confirmed today’s news about the launch time-frame. Normally you might expect the company to be a little hesitant to name a date given how badly they were burned with Vista’s delays. However, they also don’t want to let the rumors continue to spread — some people were predicting we’d see the next version of Windows as soon as next year.

Yet, it’s Microsoft’s own fault for that speculation. The company keeps showing off early versions of Windows 7 and other operating system projects — and it’s hardly being secretive about it. It’s clear that the company needs to keep excitement up about the brand given just how poorly Vista has been received, and shifting the focus forward is exactly how they are trying to do that.

I predicted as much last year, stating that I thought we would see Microsoft continue to talk about Windows 7 this year to try and blunt the negativity surrounding Windows Vista. Microsoft spent an estimated $6 billion on Windows Vista and had more than 10,000 people work on it over the course of more than five years. That hardly seems like an investment you would want to trump so quickly. Yet, before Vista was even a year old, talk started about Windows 7. People always love thinking about shiny new toys, even if they are operating systems.

So who wants Windows 7 more? It’s really a toss up at this point. Both sides clearly want it badly enough to talk about it constantly barely a year after Microsoft got its last operating system onto the streets. 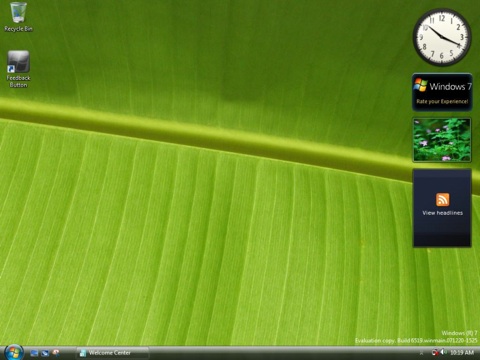 [Above: An early build of Windows 7]