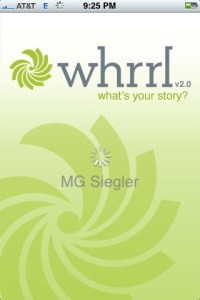 When you think of location-based social network apps on the iPhone, you probably think of Loopt or Brightkite. But it was actually Pelago’s Whrrl that was the first app to get funding from Kleiner Perkins’ iFund, to develop a location-based network for the iPhone.

While it had some success, it, like the other location apps, has been hampered by the iPhone’s inability to run third-party apps in the background. So now, Pelago is relaunching Whrrl for the iPhone with a slightly new approach.

First and foremost, Whrrl 2.0 seems much more social, with a focus on what it calls “stories.” The original Whrrl was very focused on places like restaurants around you. This new version removes that somewhat confusing interface and puts your contacts front and center. That is one of the big advantages Loopt and Brightkite had, the way they handled social connections.

The app also now allows you to very easily post status updates and photos, two things that social network users love to do these days — this is the “stories” feature. Any user can also comment on those items. And, smartly, Whrrl is now tied into both Facebook by way of Facebook Connect and Twitter. So when you update something like your location in Whrrl, the change can be sent to both of those services to let your friends know, even if they aren’t using Whrrl.

But the biggest modification may be to Whrrl’s interface itself. Not only is it less confusing as I noted above, it may be the least confusing of any of the aforementioned location-based iPhone apps out right now. It takes a little getting used to if you’ve used the old version, but the interface actually works very well and feels natural when you know where everything is. It uses a system of drop-downs and overlays to display information. 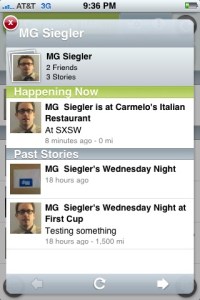 And the main browser area, which is called “People, Places & Stories,” actually reminds me a lot of what we’ve seen so far of the new Palm webOS that will run on the Palm Pre when it’s released later this year. Granted, I’m sure the architecture is much different, but it looks the same, and that’s a look that appealed to a lot of people when they saw the Pre. More importantly, this interface also feels snappy.

Whrrl 2.0 also makes the notification system a lot simpler to get emails or text messages when your friends update something within the app. And, thanks to its Facebook Connect functionality, you can actually create Facebook photo albums based off of your updates (obviously, the ones that contain pictures).

Ultimately, all of these early location-based social networks still need to establish themselves, or else they will get run over when the big guys like Facebook and MySpace jump into the location game. We’re already seeing Google do it. But fortunately for these apps, the search giant doesn’t yet have a cohesive social property to tie it all together.

This new update from Whrrl is definitely a step in the right direction if it wants to gain users. But again, the real key will be Apple creating some sort of way for third-party apps to run in the background — that is really imperative for location. Perhaps Apple’s event next week to show off the new iPhone 3.0 OS will finally address the background task issue.

Pelago had originally intended to release this new version of Whrrl this coming Monday, followed by an event at the SXSW conference now going on in Austin, Tex., but it decided to move the release up to today so that conference-goers could experience the new Whrrl in an environment where location updates are especially useful.

You can find the new version of Whrrl in the App Store here.