I read the news today, oh boy, that Twitter is turning on its algorithmic timeline by default.

I pulled up Twitter.com and opened the settings page. There it was: “Show me the best Tweets first.” Sure enough, the checkbox was checked. A few hours later, I was checking Twitter on my iPhone when I saw the effect of this change for the first time. A few older tweets I really didn’t care about all that much showed up above a newly posted tweet that quoted a tweet that seemed interesting. I was surprised — and frustrated, really. The Twitter I have come to know and love since 2008 was suddenly and gut-wrenchingly gone. 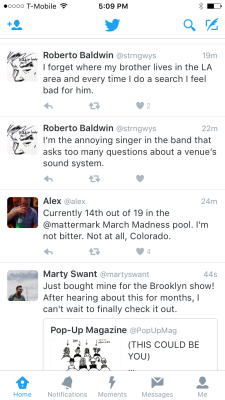 “Tweets you are likely to care about most will show up first in your timeline,” Twitter explains on its support page for the Twitter timeline. “We choose them based on accounts you interact with most, Tweets you engage with, and much more.”

But I’ve carefully tweaked my list of people I’m following for years. Every few days I add or delete someone from the list, and I care about what these people say. I’m not going to pretend that I don’t miss a single post — like Katie Drummond of Gizmodo, who complained yesterday about Instagram’s plans to roll out an algorithmic feed — but I do try hard to keep up with the people I follow.

“You can opt out of it,” my colleague Ken Yeung reminded me today when we were talking about the subject.

The point is that, even if Twitter thinks the algorithmic timeline will be better in the long term, hundreds of millions of people around the world signed up for the Twitter that existed yesterday. Perhaps a few want a Twitter that looks more like Facebook, with content selected by a recommendation system. But the new Twitter might not go over very well with every single one of Twitter’s longtime users.

I have written a lot about big data software that stores the complex data reflecting what people do on Twitter and other web services. Besides the retweets and favorites — er, likes — many of these systems can remember what people are hovering on and clicking on. This data is rich, sure. And many of the data scientists who help build applications that make recommendations using this data are smart and highly sought after. But that doesn’t make a difference if people don’t care for the recommendations they get.

Take Netflix, for example. Netflix uses the Hadoop and Spark open-source tools and has even built its own software to more effectively use them. But I have never been impressed with Netflix’s suggestions about what to watch. This is very subjective, to be fair. Still, for a long time, I’ve relied more on my friends and family members to give me excellent recommendations. And sure enough, I don’t find myself using Netflix in the same obsessive way that some other people do.

My preference for human recommendations over computer-generated ones isn’t universal. I like Spotify’s Discover Weekly. I’ve consistently been into the songs it’s placed in the weekly playlist. As a result, I listen to entire albums from the artists behind the songs. The recommendations are so good that I’m using Spotify more — and more likely to recommend it to friends.

But Discover Weekly isn’t something Spotify forces on users. It’s just there for you to turn on, much as Facebook for years allowed users to scroll through the “Top News” in the News Feed, rather than just the “Most Recent” events in reverse chronological order — until Facebook started blending the two in 2011.

Fortunately, the algorithmic timeline isn’t (yet) appearing in TweetDeck, my tool of choice on desktop. But now that we know TweetDeck for Windows is going away, who knows how much longer TweetDeck will be around.

I’m not saying it’s bad for Twitter to experiment with the algorithmic timeline. When it comes to experimenting, few companies do more, and Twitter should keep that up. How else can it see what users like?

The point I’m trying to make is that Twitter should let users try this experimental algorithmic timeline and see if they like it. If they don’t, they can turn it off. Turning it on by default and then expecting people to turn it off if they don’t like it takes away the very thing that made Twitter more appealing than Facebook for some people — you could control what you were exposed to.

But hey, at least Twitter is allowing you opt out. And that’s what I just did.