Customers acquired via Twitter are worth 23 percent less, and Facebook brings in just barely average clients. But pay-per-click advertising brings in customers worth 46 percent more, and organic search brings in buyers who are worth a massive 54 percent more than your average customer.

Lifecycle marketing company Custora regularly studies customer acquisition and other key metrics in the $200 billion U.S. digital marketing and commerce market, based on aggregated data from millions of U.S. customers and top e-commerce retailers. Today, the company released data on the lifetime value of customers based on the channel used to acquire them.

The results are astonishing.

Those results also have to be disappointing to social networks such as Twitter and Facebook, both of who have been ramping up monetization efforts in the past year. Twitter in particular has pushed its new ad solutions hard, with new targeting tools, big deals with big ad agencies, and a rumored ad exchange.

But you must take the results in context. 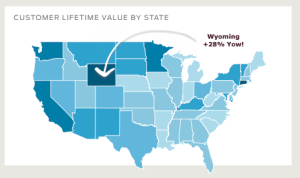 It’s much easier to prove immediate and clear customer value when the client comes in via an organic Google search or an ad specifically for a specific product.  Those kinds of channels operate on the intent graph — searchers are looking for something specific — which social networks struggle to access. However, both Twitter and Facebook are seeking ways to access that intent graph indirectly via retargeting and, eventually, via graph search. Of more immediate value, however, is that the sheer number of impressions on Facebook and Google can add up to an awareness campaign that appropriately sets up more specific and targeted channel campaigns.

One other interesting result? Rural areas offer higher-value customers, mostly because rural residents have few shopping options and are more likely to buy items online, particularly specialty items. Who would have known that Wyoming customers are 28 percent more valuable than the average American?

The only unfortunate thing, of course, is that there are so few of them.

Custora’s results are based on two years of data from 72 million American customers shopping at 86 U.S. retailers spanning 14 industries.