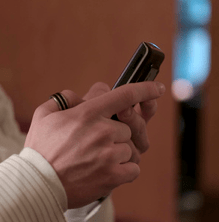 Apple had its annual shareholder meeting on lockdown today. If you wanted to be in the room, you couldn’t have a laptop or mobile phone. Fortunately, a wily rogue investors apparently smuggled in some devices and were sending updates, which Apple 2.0’s Philip Elmer-DeWitt kindly rebroadcasted for all to see. So what went down at the meeting, which Steve Jobs did not attend?

Here’s my attempt to try and make sense of the rather cryptic notes that came out of the meeting: