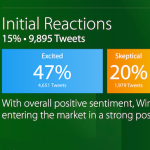 With its support for both desktops and mobile devices, the latest version of Microsoft’s new Windows 8 operating system is a radical departure from previous iterations — and something that’s making people talk.

Social media monitoring firm MashWork recently created an infographic (below) showing what people are saying about the new operating system on microblogging social network Twitter. The data collection yielded some interesting results. For instance, about half of all tweets favored Windows 8 and it’s metro-style user interface design when compared to both Apple’s iOS operating system and Google’s Android operating system.

“The most interesting thing I found was that people were so receptive to Windows 8 on a tablet,” said MashWork founder, Jared Feldman, adding that the data does skew toward tech savvy people. “A lot of times when you get very well-educated people, who know all the products on the market, they evaluate new things and immediately start hating and ripping it apart.

“What we found for the most part was that people are genuinely excited about Windows on a tablet — so much so that we actually have developer clients who are using this infographic to drum up excitement for Windows 8 before getting their hands on a developer kit to create apps (for the new platform),” he added.

MashWork studied 65,968 messages shared between June 15 and September 22 on Twitter about Windows 8. About 42 percent of all the messages analyzed occurred during the Microsoft Build Windows developers conference — meaning most of the opinions are initial reactions to Windows 8 announcements. The firm analyzed discussion about initial reactions to the operating system, Windows 8 hardware options, comparisons with other operating systems and Windows 8’s feature set.

According to MashWork’s results, the most discussed Windows 8 feature wasn’t its well-received Metro UI for tablet devices, its integration with Microsoft’s Xbox 360 or the news of the Windows App store, it was Windows 8’s quick boot time.

“Of all the new things Windows 8 has to offer, boot time is probably the last thing we expected people to be talking about,” Feldman said.

Check out MashWork’s infographic below for the full set of results from the firm’s analysis of Windows 8 discussions on Twitter.