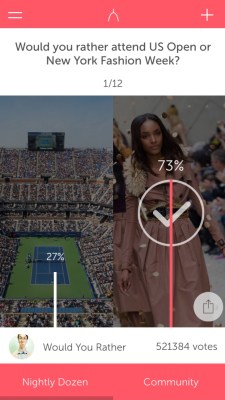 Having more than 3 million MAUs isn’t anywhere near the size of Twitter’s 316 million MAUs or even coming close to Facebook’s 1.49 billion, but it’s worth noting that the company is finding inroads into the highly sought-after teenage demographic. The 3 million-plus users are not Generation X or Baby Boomers, but rather are teenagers. So that’s saying something.

Science chief executive Mike Jones told VentureBeat that his firm was looking to focus on social entertainment, namely areas “where we could capture times where [teenagers] could get experiences throughout their day that’s social and [provides] content.” He continued, “Teenagers have a large block of time each day spent on entertainment, but weren’t consuming or spending a lot of time on apps.” Teenagers wanted more.

Instead of watching television or going on Facebook, teenagers are doing other things on their mobile device.

Wishbone is an application that’s targeted towards teenage girls that provides them pop culture content on a scheduled basis — none of this on-demand stuff. The user is shown a card with two choices, and she votes for which is her preference. Topics covered include things like fashion and celebrities. 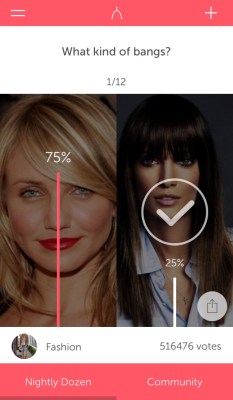 So instead of asking them to comment about a particular world issue, it’s more akin to things like, which do they like better: Doughnuts or Cupcakes? Taylor Swift or Katy Perry? They get about a dozen cards in one sitting and then have to wait for another set to be released on timed intervals — like watching an episodic television series (e.g. Mr. Robot or Days of Our Lives).

While originally the displayed cards were curated by Science’s editorial team, users can now also create their own. As mentioned earlier, this resulted in more than 200,000 being created daily, garnering more than 40 million votes — that’s certainly engagement.

Jones claimed that the usage growth of Wishbone is “skyrocketing,” but he believes that he’s found a way to tap into the teenage demographic: “There’s a belonging, fun aspect to it.”

“We looked really heavily at television and wondered about the formats that worked with audiences, and that was appointment viewing,” Jones said. “We tell the audience and notify them when a new set arrives. It’s predictable, and it can be completed. Applications on the phone need to be single-fast and single-focused. Teenagers in America respond well when they know that this app does this and this app does that. Wishbone does one thing. The specificity of action is important.”

Not one to leave out the male teenage demographic, Science also has an app called Slingshot. While Jones said it’s too early to talk about that app, he did tell us that “it is showing really strong promise.”

Wishbone is a product of Science’s Mobile Labs, which is another entity the incubator created. Science tends to not only invest in companies but also create them, often with an ecommerce or marketplace spin, such as Littlebee and EventUp. Those companies frequently don’t meet expectations and wind up shuttering. But it seems its investment strategy seems to be faring better: Science has a stake in the likes of Dollar Shave Club, DogVacay, and HelloSociety.