In case you hadn’t noticed, the economy in is struggling, and testerday’s huge stock market rally didn’t really change that. During times like these, there is no shortage of financial news, but the problem is wading through it all. That’s where Tip’d comes in.

If you’ve ever used the social voting news site Digg, Tip’d will feel familiar immediately. Instead of “Digging” a story, you “Tip It.” While there are some differences in features (such as the new site’s Reddit-like karma feature for individual profiles), the main difference is that Tip’d focuses solely on financial news while Digg focuses on a wide range of news topics. Tip’d is betting that will be a strength for their site as Digg is too broad to offer some of the real financial insight stories that people will want.

That rings true. When it started, Digg’s strength was in technology news. As it has expanded, politics are playing a larger role in the service’s all-important front page (which most users read). You can drill down to find popular Business & Finance articles, but many are more general, big news stories, and new ones aren’t promoted to the front page all that often.

Of course Digg also has a major attribute that Tip’d does not — users. Even if there is a lot of good financial news out there on the Internet that would be perfect for Tip’d, someone is going to have to find it and submit it. But gaining users may not be so tough if enough people find Tip’d compelling: The plan is for the site to throw its doors wide open today and let anyone sign up. There will be no limited beta test. That’s a bit risky. 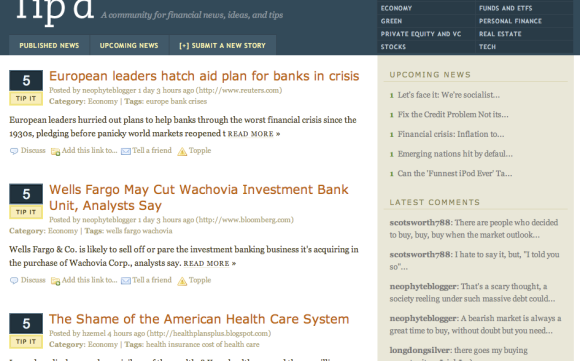 Saleem is a very popular user on Digg itself. He has nearly 1,900 stories submitted to the service that have hit the front page. So you have to think he knows what he’s doing here. Tip’d didn’t approach anyone at Digg about this project, Saleem says.

Tip’d was founded by businessmen who wanted to build an online community around finance. A big part of community on social networks is conversations, but this is arguably a weakness on Digg, where conversation often get out of control. Other popular social sites such as YouTube have similar problems. But by appealing to a niche, Tip’d may be able to get around that.

“We believe that our narrower focus on the finance vertical (niche) will improve the quality of the conversation on the site,” Saleem says.

Tip’d encourages any site focused on finance to submit their content and let the community decide if it’s good. The submission process, again following the Digg method, is a relatively simple 3-step process.

Right now when you click on a title link on Tip’d, it takes you to the story’s specific landing page on Tip’d. This is different than Digg, which takes you to the actual story itself. Many users will probably find this annoying, and Saleem acknowledged that Tip’d is working to change that.

Will Tip’d take off while so many other Digg clones fail? Hard to say; it looks pretty nice and is easy enough to use, but at the end of the day it’s all about getting the users. The fact that the world economy is in turmoil certainly makes this a timely launch.