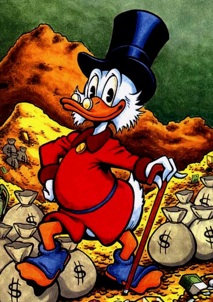 Apple has a lot of cash on hand. $24.5 billion in fact, which is more than even Microsoft now. With it, Apple could buy a whole bunch of things. 24.5 billion things from the Dollar Store, for instance (at least in states that don’t charge sales tax). In one of the great turns of fortune, Apple could even buy computer maker Dell — in cash — as Apple 2.0 noted earlier today.

This must be particularly sweet for Apple because Dell founder Michael Dell famously said 11 years ago that he would shut down Apple and give the money back to its shareholders, when asked what he would do with the then struggling computer maker (this was before iPods, let alone iPhones).

Of course that’s just on paper. Dell’s market cap is $23.48 billion, if Apple actually wanted to acquire Dell (which you can be certain it doesn’t), it would likely take substantially more money. But there are several significant companies out there with severely sunken market caps due to the poor performance of the stock market recently.

Aside from Dell, with $24.5 billion in cash, Apple could now technically afford:

ZDNet lays out some other possible acquisitions Apple could make among non-publicly traded companies including TiVo, Pandora, Last.fm (which CBS Interactive already owns) and Hulu (which NBC and Fox own).

TiVo and Pandora are interesting as both could complement or help areas of existing Apple businesses (Apple TV and iTunes respectively), but none seem particularly likely at this time. As are none of the above companies I laid out. Many of the companies know their stock prices are down temporarily, and their shareholders would likely demand a premium on the current stock price to close a deal. Instead, expect Apple to sit on its bags of cash snapping up smaller companies to bolster its future — like its purchase earlier this year of chip maker PA Semi — as it continues to rake in more money.

Update: Apple announced during its Q1 earnings call that it now has over $28 billion in cash.