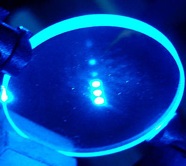 When Toshiba conceded the defeat of HD DVD to the Blu-ray format, most consumers (beyond those who were unfortunate enough to be HD DVD early-adopters) cheered. The thought was that one option would finally create a viable high-definition disc format (our coverage).

It did, sales are way up. However, the downside to the lack of competition is that the prices of the Blu-ray players appear to be rising.

A scan of price aggregator Pricegrabber.com shows that the average price of a Blu-ray player is now $400 — just as it was one year ago, Tom’s Hardware noticed.

Prices had been coming down as Blu-ray tried to finish off HD-DVD once and for all with deep discounts on the players. Now, with no reason to lower prices, manufacters aren’t.

Don’t look for this trend to continue for too long though — Hollywood isn’t stupid. When the majority of the studios came together and decided that siding with Blu-ray was the way to go, they did it because they knew a new market being created (for Blu-ray discs) would boost up their bottom lines amid falling DVD sales. If Hollywood starts to see sales of Blu-ray players tail off, they will pressure the manufactures to lower the prices.

There have been cost breakthroughs in the creation of new, smaller Blu-ray lasers, the key component of the Blu-ray player. These parts now being cheaper and easier to make will also lead to prices coming down in the not-too-distant future.