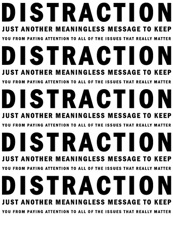 The social content conversation site FriendFeed is a huge time suck for a lot of people. This includes me. I sit on the site throughout the day and constantly hit the refresh button to send me new information from my contacts. Now I no longer have to hit that button, as FriendFeed has launched an area known as “Real-time.”

As you might imagine, this is a constantly updating stream of information from your FriendFeed contacts. But it looks a little different than the regular FriendFeed river of information as the user’s icon shows up followed by a chat bubble with whatever update they have made. Dare I say, it looks like the micro-messaging service Twitter.

You can find the new real-time area here or by clicking on the real-time link next to “View” in the upper right corner of the site. Yesterday, I noticed that FriendFeed had tweaked the layout of this area a bit to make it so that “Best of day” was the default “Best-of” area while “week” and “month” views fell into a drop down below it. Now it’s clear this move was made to make room for Real-time.

It’s interesting that Real-time is marked as “Beta,” yet FriendFeed didn’t re-open the beta.friendfeed.com site to test this feature. It had tested several new features on FriendFeed Beta recently before rolling them to the live site. This live beta test probably has something to do with the fact that the final U.S. Presidential debate is on tonight and FriendFeed knows these live updates will do well for such an event (as FriendFeed notes in its post). 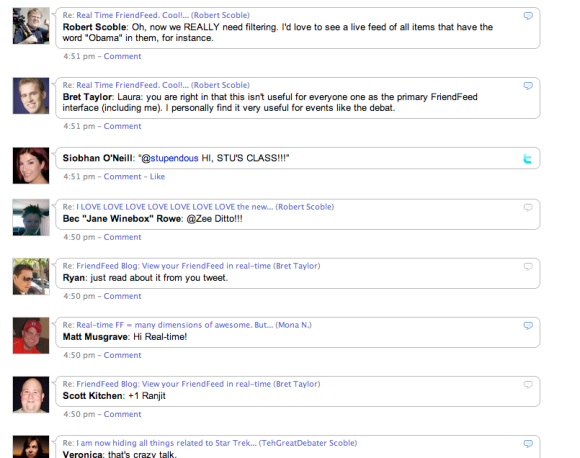 In fact, this real-time area of FriendFeed reminds me a lot of Twitter’s Election area, which also pipes in updates in real-time. Of course, Twitter’s area is just meant for election news, while FriendFeed pipes in everything. FriendFeed’s live river is also more functional as you can comment and like items right from the river. Also cool is that FriendFeed made a way to pop the Real-time view into its own window so you can keep it in view while you’re doing other things on the web.

This Real-time area of FriendFeed also reminds me a bit of Digg Spy, the area of the social voting news site that would allow you to see people digging items in real-time. Digg recently announced it would discontinue Digg Spy as it became too taxing on its servers. It should be noted that at one point back in the day (meaning 2007), Twitter also updated continuously, but the service had to stop that as it grew in size.

Interestingly, you can also embed the Real-time view into your blog. This will be useful for say, Apple event live coverage rooms — way to be a day late FriendFeed! But real-time updates embedded on a page without needing to reload is very nice. (See below for an example of how this will work with an election room for tonight embedded.)

As many users have already noted on the site, there needs to be a filter so you can only get select live updates coming in. While this works for rooms, if you could get only updates that contain the name “Obama” across all of FriendFeed tonight, that might be better.

This new real-time river feature also underscores the need to be able to like individual comments.

I would not be surprised at all if this new functionality ramps up usage of FriendFeed. Everything going by on my river now I’m compelled to comment on because I know others are talking about it in real time.

Yeah, I’m never going to get any work done again.

Update: FriendFeed co-founder Bret Taylor has this to say about Real-time not going in the beta area: “The feature is pretty self-contained, so if people don’t want to try it out, they don’t have to. We will likely reserve beta.friendfeed.com for features that are not so self-contained.”