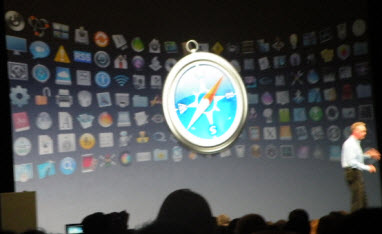 Bernard Serlet, the top Mac OS executive, has taken the stage at the Apple Worldwide Developer Conference and announced the company is shipping a new, faster version of the Safari web browser.

Serlet cracked some jokes about Vista, saying that Microsoft has dug itself into a big hole with the operating system and still hasn’t fixed things with the upcoming Windows 7, due out later this year. Serlet said Safari 4 will be built into Snow Leopard, the latest version of the Mac operating system. Safari 4 is 100 percent compatible with web standard Acid3, Serlet said.

Safari gives you a Coverflow-style view of your browsing history, meaning it can scroll sideways through your previously visited web pages. And if a plug-in crashes in the web browser, only that section of the browser will crash. The rest of the browser page will still be functional.

Serlet also announced a new version of QuickTime, dubbed QuickTime X, with hardware acceleration, better color range, and improved web streaming capabilities. It has been rebuilt ground up for Snow Leopard. The aim is to put video center stage in the display/editing process. You can trim videos almost instantaneously and scroll through selections of videos to find the one you want. You can also easily share videos with iPhone friends.

Snow Leopard itself, which ships, will have built-in support for multicore microprocessors (the majority of the market now) which have more than one processor on one chip. Support for graphics is also much bigger than it the past, which is great for graphics chip makers such as Nvidia. Apple has led a new graphics standard, Open CL, which lets computers use the non-graphics processing power of graphics chips.

Snow Leopard also has support for Microsoft Exchange, making it easy to set up a new email account on new Mac computers.

All of this means that Apple is keeping the pressure on Microsoft. This are refinements, but most of them drew lots of ahs from the faithful in the crowd.