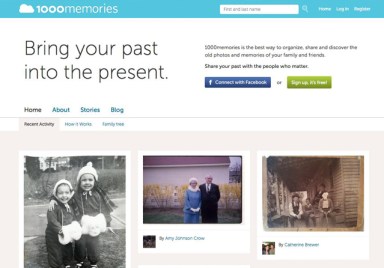 1000memories, an online memory-sharing site, is well on its way to finding revenue after launching a new content-sharing feature today called Shoeboxes.

1000memories, which got its start in life at startup incubator Y Combinator, creates landing pages for individuals. Anyone can jump to a page and write a few words or post a picture or song. The result is a collage of photos, music and thoughts that’s supposed to capture the essence of that person. With Shoeboxes, 1000memories is trying to distance itself from being solely an obituary-focused site and hopes to become a more general story-sharing site.

“One of the main things we want to communicate with this announcement is that we’re not longer a ‘site for the dead’ — we’re now a place for you to share your old photos and stories of anyone, whether it’s yourself or your great-great-grandma,” 1000memories spokesperson Helena Price told VentureBeat.

With the Shoeboxes feature finished, the company might now turn its gaze to creating photo books and finding a way to monetize a site built around strong emotional investments.

“We’ve recently been testing out photo books, and they were received really well by our users — we’re going to wait on a full launch for them until we develop software to better automate the process,” Price said. “Otherwise, we’ve been totally focused on building a solid product for now, and our investors have been happy with that.”

When I last spoke with 1000memories’ co-founder Rudy Adler, he said the company wasn’t yet planning on monetizing the service. 1000memories isn’t alone, either — GroupMe, another zero-revenue company, was recently picked up by Skype for an undisclosed, but large, amount. There’s a long history of companies with zero revenue being acquired and receiving large investments.

“Most companies that enter an incubator are in the idea phase — especially those that go through Y Combinator,” Greenstart, a cleantech company incubator, co-founder Mitch Lowe told VentureBeat. “They don’t have real revenues or have them on the horizons.”

The new Shoeboxes feature is a faster, more efficient way of uploading photos and other pieces of content. Similar to Facebook, you can now edit tags and other parts of the photos in bulk and organize them around specific topics. Other users can visit any Shoebox and add comments or adjust tags for the photos.

Most crowd-sourced sites run into the problem of ruffians and trolls infiltrating the community and trying to disrupt — such as at sites like news aggregator Digg and online message board 4chan. 1000memories seems to have avoided that problem thus far.

1000memories participated in the summer 2010 class of Y Combinator, a Silicon Valley-based incubator run by super angel Paul Graham, and has raised $3 million in funding to date. Greylock Partners led the company’s most recent $2.5 million funding round. A number of other angel investors including Keith Rabois, Ron Conway and Chris Sacca also participated in its recent funding round.