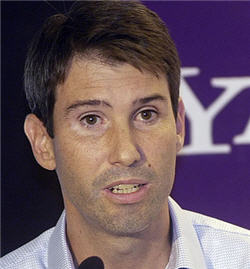 While Internet ad spending has fallen off in North America and Europe, the Arab online ad market is still growing between 25 and 50 percent per year. That’s the claim Yahoo’s senior vice president of emerging markets, Keith Nilsson (pictured) made at a press conference in Dubai earlier today announcing Yahoo’s purchase of Arabic portal site Maktoob. (This link goes to the English version of the site.)

Yahoo paid $75 to $80 million for Maktoob, according to PaidContent editor Rafat Ali, and will create a new division named Yahoo Middle East. Yahoo claims to have 20 million users in the Arab world already, but Maktoob claims its own audience of 16 million.

The Wall Street Journal quoted Nilsson: “Saudi Arabia and Egypt offer tremendous size and growth opportunities that we will be looking at in addition to other countries in the Middle East.” Egypt has the largest population of any Middle East nation. Saudi Arabia, the world’s top oil exporter, has the Middle East’s largest economy.

Maktoob co-founder Samih Toukan agreed: “We are talking of an online advertising budget of probably $40 to $50 million that is even growing this year at 30% to 40% even with this global financial crisis.” Toukan will continue to manage Maktoob.com and several associated sites.

Looking for something to complain about? Watch how Yahoo handles censorship issues in the Middle East. The company’s record in China suggests Yahoo won’t be the Arab worlds’s voice of democracy.