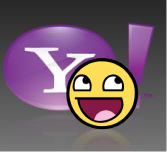 Yahoo’s vast library of patents could become quite lucrative for the company if it decides to put pressure on Facebook, which is set to make an initial public offering in the near future.

Yahoo currently owns 1,100 patents and has 2,661 applications pending. Of those, the most valuable is certainly a patent for pay-per-click advertising, which was originally filed by Overture-owned GoTo.com. Overture brought several patent infringement cases against Google, which Yahoo then took over in 2003 when it purchased the company. Unlike Overture, Yahoo wasn’t as keen on using its newly purchased patents offensively.

Yahoo decided to settle the patent dispute out of court for some Google preferred stock, which the company ended up selling after Google went public in 2004. As Forbes contributor Eric Jackson points out, this was a phenomenally stupid move and Yahoo could have ended up getting much more money out of Google.

With Facebook, it seems that history could very well repeat itself. The giant social network is poised to make an IPO some time over the next calendar year. If Yahoo were to pull the same patent infringement card that it did with Google, it’s likely that the company wouldn’t be so hasty in making a deal to absolve the dispute out of court.

One reason Yahoo might be holding back from using its patents offensively could be its search partnership with Microsoft — a Facebook shareholder. However, if Yahoo were to sell those patents there wouldn’t be anything from keeping the new owners from pursuing legal action against other major players in the online advertising space.

“Generally speaking, the quality of Yahoo’s patents have diminished over time,” said Ocean Tomo Managing Director Michael Friedman, whose company advises on patent and IP purchases. “It would just surprise me if they were focusing on a patent sale, especially given all of the other noise the company is dealing with.”

Without close examination, Friedman said it’s difficult to know if Facebook is in violation of patents owned by Yahoo.