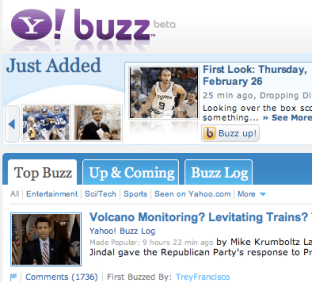 As part of Yahoo’s plans to shutter several major services, the company has announced that it will shut down Yahoo Buzz, its social news Digg competitor, on April 21.

But perhaps more interesting than Buzz’s imminent death is the fact that Yahoo announced the service’s closing several weeks ago on April 4, but nobody seems to have noticed. It wasn’t until this morning that TechCrunch reported on the shutdown, and other than a few scattered press releases from Yahoo on the net, there doesn’t seem to be much earlier mention of Buzz’s passing.

There’s also a prominent announcement at the top of the main Buzz page, which I assume has been there for weeks and has also gone unnoticed.

That it took so long for anyone to recognize Buzz’s passing is more telling of Yahoo’s failures than the actual death of the service. Even in its heyday, when Buzz was sending obscene amounts of traffic to sites that were voted popular (mostly because those sites also appeared on Yahoo.com, one of the most trafficked sites on the Web), it still seemed no one but hardcore social news junkies was talking about it.

Buzz, which first launched in February 2009, is yet another potentially useful service that was squandered by Yahoo. That list includes Delicious, which Yahoo says it’s planning to sell off, and the social photo site Flickr, which somehow completely missed out on the mobile photo craze. Yahoo has already shuttered MyBlogLog, a service it bought for $10 million that let you create communities around your blogs.