Yahoo’s communication software company Zimbra is making the Zimbra Desktop beta version 3 available for download today, continuing to push against Microsoft’s Outlook by offering to be your all-in-one email client.

I set up the open-source Zimbra Desktop on a laptop running Windows XP. The install requires a smidge under 160 MB of disk space to install, and I was easily able to sync up my Gmail account to it. Overall, the interface is clean, quick, and responsive. Syncing my 1.3 gig Gmail inbox took a while, but was mostly painless. The client allows for time-savers like clicking on an address within an email to bring up a map or clicking on a date to open up your calender, as well as easy tagging of emails and easy searches of your inbox. The desktop client also incorporates Zimbra Documents, a document and spreadsheet program, Zimbra Briefcase, a file uploading service, and Zimbra Tasks, a task-management system. 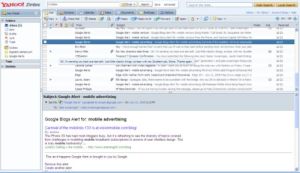 Some functionality is still needed. I can’t yet sync up my Google calendar, though Zimbra says this functionality is coming. Also strange is the inability to simply scroll down continuously — each page displays 50 emails, and at the bottom, the user must click the Next Page button to continue on. That said, compared to the frustrations of wrestling with Outlook, Zimbra Desktop is a much better user experience.

Zimbra, which we’ve written about before, was acquired by Yahoo for $350 million in 2007. The first version of the Zimbra Desktop beta launched a year and a half ago, and the third version was announced today at the O’Reilly Open Source Convention. The company also offers its open-source email and calendar server Zimbra Collaboration Suite, which VentureBeat founder Matt Marshall reviewed enthusiastically in February of this year, writing, “Zimbra pushes collaboration features a lot further than Microsoft’s offerings and does so for a very low cost.”