Question: what would you do with six hours in Amsterdam? Dubai? Barcelona? That is precisely what Yahoo TimeTraveler was created to answer.

A few years ago I stopped for six hours in Amsterdam en route to a conference in Cairo. I took the train from Schipol airport into the city, picked up a ride on a canal boat, dawdled through the ancient streets by the Oude Kerk, and toured the Anne Frank house. But did I see the best of Amsterdam? Hard to say. 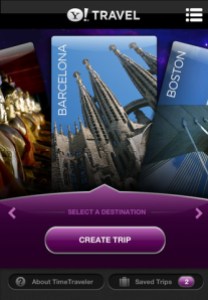 Yahoo, which seems to be on a bit of a roll in the past few weeks, releasing “killer” mobile browsers and reinvigorating Flickr groups, released TimeTraveler for iPhone and iPod Touch today. With TimeTraveler, I’d have had a much better chance of seeing the best of Amsterdam that fit in my 6-hour slice.

Using TimeTraveler is easy: input your destination, your starting point, and the time you have available. TimeTraveler will do the rest, finding points of interest, tourist destinations, and historic monuments. It will then map them into an itinerary tailored to your available time and desired route, which can be shared with friends via email, Facebook, or Twitter. Yahoo calls it “timed travel” … hence the app’s name.

Part of the technology behind TimeTraveler is, interestingly, Flickr. Apparently, photos uploaded to Flickr with date, time, and geographical metadata are used in the calculation of what destinations you can expect to visit within a set period of time. As Shouvick Mukherjee, a vice-president for Yahoo India told The Business Standard, Time Traveler “computes through Flickr images which people have uploaded in the past and tells him the destinations he would visit, say in an hour.”

Another clever feature is the ability to save your trips in the cloud. Once you publish your trips to Yahoo, they are accessible online as a permanent record of your adventure.