The reason I liked the Internet television service Joost had nothing to do with the content. Rather, I saw its interactivity with other web services while watching the content as the future of television. While Joost itself may be struggling, the idea of adding widgets to the television experience lives on. Today at the Intel Developer Forum (IDF), Intel announced a partnership with Yahoo on the Widget Channel, an application framework that brings widgets to your television.

If you’ve used Yahoo’s Konfabulator widgets (now called Yahoo Widgets), this is the same idea, I was told as the Yahoo display booth today. Basically these are small programs that run on top of whatever you are doing in the background. Usually these run on computers so that backdrop is your desktop, now that backdrop will be programs on your TV.

But let’s call this what it really is: An app store. It’s a free app store, but it’s still an app store.

Who else has an app store — or rather the App Store? Apple.

Not only does Apple have the App Store, it also has several patents for putting widgets on your television, presumably through its Apple TV device. I’ve gone one step further before and said Apple will eventually extend its popular App Store, currently only available on the iPhone and iPod Touch, to the Apple TV (and other devices) as well. Widgets or small apps, what’s really the difference? They’re coming. You know it and I know it. 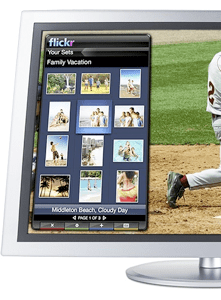 But Yahoo has a key weapon for its Widget Channel; despite being unveiled at the IDF with Intel, Yahoo doesn’t plan to be exclusively on any set-top device Intel may make, representatives tell me. Yahoo wants to own this space and put its widgets on any device possible. DVRs, cable boxes, Blu-ray players, you name it. By contrast, with any widget channel (*cough* App Store *cough*) from Apple, you can be be sure it will only be on Apple products.

Yahoo’s Widget Channel has been in development for about a year, but since it basically works the same way as the Konfabulator widgets, it has an even stronger background. Developers can use JavaScript, XML, HTML or Flash to write widgets for this new platform.

Yahoo representatives noted that Intel was currently the only chipmaker with something powerful enough to run its widgets as it would like. For the foreseeable future, these Intel chips will reside in set-top boxes, but eventually the plan is to integrate the Widget Channel right into the actual TVs.

One of the most interesting things to me about the Widget Channel is one of the showcase partners: The aforementioned Joost. I was confused about how exactly Joost would function as a part of the Widget Channel since Joost has its own widgets. Would you be running widgets within widgets? Yahoo admitted it hasn’t really figured out exactly how Joost will work on the platform yet, but that the company wants its content to be a part of the platform.

Another surprise widget is Blockbuster. The name once synonymous with movie rentals has been struggling ever since Netflix changed the game to DVD rentals over the mail, and now several services threaten to move the industry fully digital over the Internet. But Blockbuster, shortly after finally announcing it would allow instant streaming access to movie over the Internet (with the help of its Movielink purchase last year), finally seems to be embracing digital distribution over the Internet. With its Yahoo widget, you will be able to rent and watch Blockbuster movies on your TV. 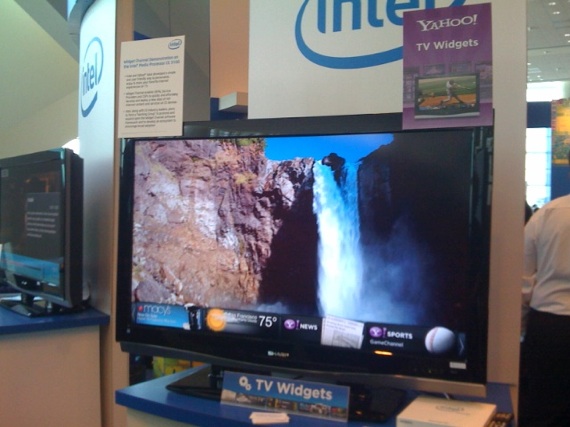 The system itself, even in prototype form, is impressive. I saw the Widget Channel running on a stand-alone Intel box connected to an HD TV. It looked great. I was watching some nature show in high definition and pulled up the Flickr widget. On the left hand side of my screen I could see any pictures I wanted from Flickr while still watching the show. Or I could move them to the main screen and see them in all their glory.

Though Flickr is a Yahoo-owned company, Yahoo told me that it’s open to letting any other service create widgets. For example if the Google-owned Picasa made a widget, that would be fine.

Another interesting aspect of the Widget Channel is advertising. While there was one demo ad in the widget toolbar, Yahoo told me it want to be careful not to ruin user experience by placing too many ads on there. The ad, for a coffee maker, looked nice. Clicking on it opened the widget where you had the option to buy the product.

Interaction with widget was all done via remote control. This may sound cumbersome, but the Intel remote has a nice color-coded button scheme to ensure relative ease of use. Still, a Wiimote-like pointer might work better. That, of course, is dependent on what device the widgets are running on. Come to think of it, Yahoo widgets on the Wii would rock.