FireEagle, the service that Yahoo has developed for users to control their location-based information, and then offer it up to their favorite applications, will formally launch publicly this morning.

Expect to see details from Yahoo on its blog at around 10am. It is being announced at the eTech conference in San Diego. [Update: Yahoo is also pointing to its FireEagle developer group, and to API documentation.]

FireEagle is significant because Yahoo expects it to be the most comprehensive location-based control system so far, and could make a breed of applications much more dynamic and useful. Yahoo has also opened it up for developers to use on any platform or application. The only caveat: Consumers will get to control what they want the system to have.

The project, which has been worked on for months at Yahoo’s Brickhouse in San Francisco, will offer APIs so that other applications can accept your location coordinates and feed it into FireEagle’s system too. Yahoo will first launch with several applications of its own.

Here’s how it works. You can set your phone, if it has GPS, to automatically update FireEagle with your whereabouts at regular intervals. You can also add information manually to supply precise information: You can text the system with your location, naming a cross-street in a city, a zip-code or even latitude/longitude coordinates.

Then, you can authorize an application like Flickr, or Facebook, to access your location information. Flickr can then stamp your location on the photos, which make them easier for you to file and organize, and for your friends to see where you are. All kinds of applications can be used with FireEagle: It can be used with Twitter, so that users of the messaging system can more easily supply their location (and for example, they can choose to get messages from only people from New York; while some applications have been built to do this already, they haven’t been very accurate), and with local community sites such as OutsideIn and geo-blogging site Plazes (which has long let people report their location information). Some of these applications already collect geo information, but none of them share it. By letting everyone jump onto FireEagle, every application has more information on more users. 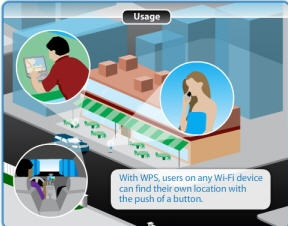 Tom Coates, the Yahoo developer who led the project, and who I met with late last year, likens FireEagle to Paypal, a service in the “middle” handling the data. For example, even Google would be accepted, if it is willing to, say, send information it gathers from its own location technology using cell-phone tower coordinates. Loopt, another mobile-location service, is another potential partner (Yahoo’s argument is that it would be better able to monetize Loopt’s service, given Yahoo’s huge base of advertisers; there could be a revenue share). There’s also Skyhook, which gathers information from people with devices enabled with WiFi technology (image left). Whether these companies remain competitors to FireEagle or become allies is difficult to know.

Other applications might be enabled with this, Coates said: One might be to help you find a group of friends, by tapping into their cell-phone GPS location information, or a “Proximizer” application which gives you updates on where your boss is, or desktop photo applications tracking the location of your friends. It could be used in mashups with say, Last.fm, letting you hear what music your neighborhood friends are listening to.

The big question, of course, is whether users will play along. How much are you really going to be motivated to supply all this information willingly, and how often are you going to update it? It takes work. It’s not clear how much outside companies will contribute. But it’s a noble effort, considering it is open, and that FireEagle’s biggest competitors — large carriers such as British Telecom, and increasingly U.S. carriers which record your GPS data — often don’t let users opt out.

FireEagle’ team of about eight developers have been working over the past few months with scores of third-party developers to help seed the service for launch.

Of course, the big down side is that people may forget how much information they’re sharing, and with whom.

The program emerged from work done by Yahoo’s Zonetag research project at Berkeley, which let you tag photos with geo information as you uploaded them to Flickr. The location brokerage idea is new, and Yahoo has a patent pending for i.t FireEagle is part of the advanced products team located at Yahoo’s Brickhouse in San Francisco, now led by Chad Dickerson (pictured here). FireEagle was built on Ruby on Rails.

Why the name FireEagle? Well, it was a placeholder name, while Yahoo figured out if it could use the name PinPoint. It was unclear who owned the trademark, and Motricity owns the PinPoint URL. As of this writing, we’re not certain what name FireEagle will launch with.

There are no plans on how to monetize the service, Yahoo tells me. Potentially, advertisers might be able to sell against it, though, and Yahoo might take a cut, as discussed above in the Loopt example.