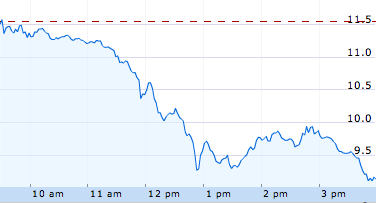 Those who were hoping that Yahoo chief executive Jerry Yang stepping down would solve Yahoo’s recent stock woes got a very rude awakening today — to the tune of a 20.87 percent drop in share price. Yes, Yahoo’s stock is now below $10 a share, closing the day at $9.14.

The stock hasn’t been at this level since the very beginning of 2003. More importantly, it’s now barely more than the mid-$30 a share price Microsoft was willing to pay to acquire the company just a few months ago. (Of course on the stock side, Microsoft isn’t doing much better, closing the day at $18.29 a share — its lowest level since sometime in 1998. Yes, a decade ago.)

While almost everyone seems to be waiting for Microsoft to swoop in with another offer for Yahoo, Microsoft chief executive Steve Ballmer reiterated for Nth time (N being an ever-increasing number) that he’s not interested in Yahoo anymore.

“We are done with all acquisition discussions with Yahoo,” Ballmer said, adding that he was repeating himself as some people seem to be “confused,” CNET reports.

It’s not really confusion, it just doesn’t make a lot of sense that Microsoft wouldn’t go after the company it was so hot for just a few months ago, now that Yahoo can likely be had for a ridiculously lower price.

Could Ballmer be telling the truth? Of course. Today, at least. But the truth is relative and tomorrow is a new day. Just ask Newsweek reporter Dan Lyons who was told and believed that Jerry Yang would not be stepping down as Yahoo’s chief executive. (Lyons recently was forced to remove posts on his own site after criticizing Yahoo for what he considered “lying.”)