What’s the best local place for coffee? What about a burrito? Chances are if you don’t know, you know where to find out: Citysearch, Yelp, Zagat or any number of other sites. But that isn’t preventing a new generation of startups from trying to get their foot in the door. The latest is Praized Media, which is launching into public beta today.

Despite the ubiquity of local listings, sites like Yelp have some weak points that can be attacked. In areas outside the big cities — San Francisco, New York and so forth — listings are sparse. But inside those urban areas, too many reviews can overwhelm users, who don’t know which to trust. 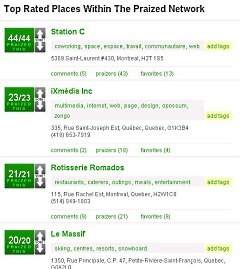 Praized, rather than maintaining such a top-heavy site, offers a platform that ties into media like blogs and social networks with a light-weight voting and comment system. Bloggers and publishers can easily integrate the Praized tools into their sites so that if, for instance, they write about a coffee shop, Praized is attached. For users, there are “tribes,” which represent their friends, allowing them access to trusted reviews.

The problem for Praized is going to be lack of a distinct identity. The voting tools look very similar to Loladex, which launched its social listings platform on Facebook in March. Another site, Center’d, wants to create its own social network based around events and listings.

Praized does have brand-new partnerships with Yellowbook and Localeze. But if its scheme appears to be working, the existing listings sites are still young and nimble enough to add in basic tools that mimic what Praized and others are doing. At the very least, the competition will be stiff.