YouTube today announced a new platform for third parties to more easily publish videos directly from their own sites, without having to first go to YouTube to do the work.

It’s the latest move by YouTube to offer the infrastructure for more kinds of online video, presumably so it can eventually run its own ads on any video, anywhere.

The changes today allow an external site to upload videos and video responses to YouTube from within the third-party’s own user interface, including tools for setting up options like pause, play and stop. Previously you had to do all that from YouTube’s site, even if you were going to distribute the video elsewhere later on. The new service also lets you add or edit user and video metadata, such as titles, comments, ratings and descriptions. 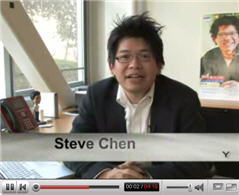 Click on the image at left to run a video providing more details.

The Google-owned company uses the usual Google line about everything being free and available to anyone. As the company said in its announcement today: “We do all of the hard work of transcoding and hosting and streaming and thumbnailing your videos …”

Every video that third parties create using YouTube’s new APIs will also appear on YouTube. On the one hand, this can bring more traffic to the third party’s video, and so the move makes sense for the many partners that YouTube has lined up for this launch. Electronic Arts, for example, will let users create videos out of its new game, Spore, using the YouTube service.

On the other hand, however, it means video viewers can just go to YouTube and avoid the third party’s site. This is something star video creators like gossip blogger Perez Hilton have already rejected (our coverage), because while YouTube can still make money by selling ads on it site alongside videos, third-party sites themselves may get less traffic — so less money.

What’s not addressed today: Will YouTube let third parties run their own video advertising in their videos? [Update: John Paczkowski’s blog quotes the API terms of use as saying YouTube won’t allow third-party ads on these videos.] YouTube is experimenting with its own overlays and other forms of video advertising — and certainly, it and every other online video provider is still figuring out how to monetize. The reason sites like Hulu exist is because the best video creators and publishers don’t want YouTube getting the traffic and the advertising dollars from their hard work.

Which leaves me wondering: Is today’s announcement an act of munificence? Or is it a shrewd business move to wipe out an entire range of competing video distribution and advertising service providers — Brightcove, Maven Networks (which just got bought by Yahoo), Broadband Enterprises (our coverage), and many, many more. In my view, as long as these companies continue to offer better ways for creators and publishers to make money, YouTube’s move is unlikely to be a threat.