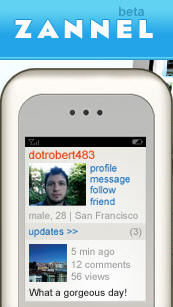 While the idea of text messaging has grown in popularity — both via the phone and in the form of Twitter — startup Zannel seems convinced that people are more interested in sharing pictures and video, at least while on their mobile phones.

Zannel, which has been called “a multimedia Twitter,” lets its users post updates and start conversations using text, pictures or video, or any combination of the three. Users can keep track of their friends on their phone, or on their computer.

Now the Menlo Park, Calif. company has raised $10 million in backing to help remain in the pack of companies trying to push mobile social networking.

In his excellent piece for VentureBeat describing the ten most important mobile social networks, mobile consultant Matthaus Krzkowski listed Zannel as one of the fast-growing newbies.

Here’s what he said of Zannel, and particularly noteworthy are his remarks about Zannel’s readiness to mesh itself with other social networks:

Zannel did not disclose detailed traffic figures to me, beyond saying “we currently serve millions of users per month.” Assuming that’s true, that easily makes them one of the big players in the field, and their claim to be “mobile’s first Instant Media Messaging service” may be valid, when you look at market acceptance and consider that rich media apps are its No. 1 traffic driver, according to the company. The majority of Zannel’s business is off-deck where Zannel sees “incredibly fast, viral uptake,” suggesting strong recent growth. Over two thirds of Zannel’s traffic comes from the mobile web, the remainder comes from online.

Zannel sees the iPhone as a transformative product for mobile industry — it increases awareness of mobile’s potential and is a great platform for distributing rich media apps (Zannel’s traffic driver). As a mobile media messaging hub, Zannel lets users visually communicate with other users across all major social networks vs. just one. Therefore, Zannel sees the major social networks as complementary services rather than direct competitors.

The company claims to have numerous big-name partnerships with companies including Warner Bros, New Line Cinema, Activition, Toyota, Limelife and others. It is included with some Verizon and Helio handsets, or can be downloaded by its users.

Alloy Ventures led the $10 million funding and was joined by previous investors U.S. Venture Partners and Palomar Ventures. Zannel has raised a total of $16 million; see our article on its first funding, in 2006 for a few more details on its founders.