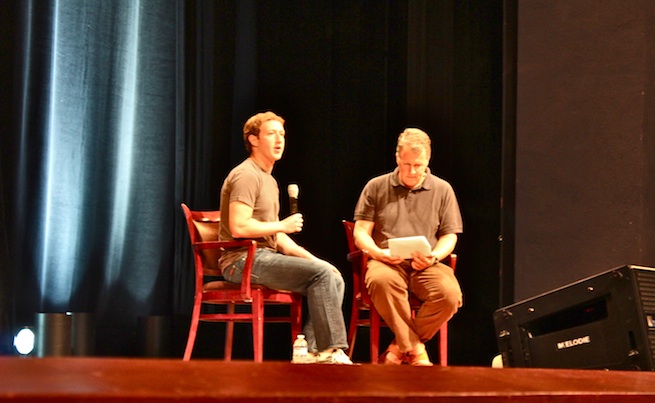 Since the social networking giant’s initial public offering in May, this is one of only a handful of public appearances he’s made. It proved to be a rare window into the mind of Facebook’s young CEO, who spoke for 45 minutes before rushing off to the wedding of a close friend and fellow Facebook employee.

Zuck was interviewed on stage at Startup School, an annual conference, by the outspoken founder of Y Combinator, Paul Graham.

Advice to entrepreneurs: Take your time, “bake the product”

Don’t believe everything you hear in the hit flick, The Social Network. Zuck told the audience that he was in favor of online ads in the early days, and gave Eduardo Savarin (one of Facebook’s cofounders) full control. He said that the ads provided sufficient revenue for the team to purchase servers. This was the revenue that supported the startup’s protracted growth.

“Whenever we had money, we got another $85 server,” said Zuckerberg. “We never spent money.”

None of the founders had any startup experience, but they were highly strategic. Zuck specifically chose to bring Facebook to colleges that were already using social networks, such as Friendster or a university-owned service. It was evidence that the community was ready to share and connect online.

From the beginning, the founders were convinced that there had to be more than a simple profile page. They were always willing to devote time and resources to building out sharing features like integrating course catalogs, even if it proved to be an obstacle to growth.

“Facebook did grow quickly but it took a year for us to get a million users,” he said. “It wasn’t as quick as a lot of things grow today. Having that time to bake was valuable for us.”

In that first year, Facebook was just a hobby

It was a shock to hear that if Facebook hadn’t worked out, Zuckerberg would have joined a tech giant, rather than a startup. “I probably would have taken an engineering job…[and] always had a lot of respect for Microsoft,” he said. “A lot of people from Harvard went to work there.”

He admitted that a huge part of Facebook’s success was in its timing. People were already beginning to embrace sharing online through sites like Wikipedia. In addition, Friendster had a scaling problem, but had experienced skyrocketing growth. Graham wondered whether, if Zuckerberg had been a few years younger and Harvard’s own social network had taken off, Facebook would exist today.

Zuckerberg is convinced that going forward, we will continue to voraciously share their photos, ideas, and status updates. That’s how Facebook will remain relevant. “Ten years from now, people are going to be sharing a thousand times more a day,” he said. “Our continual mission is to build the next big thing — that’s what we live for at Facebook.”

He never intended to drop out of Harvard

“My life is a long history of people thinking I would drop out of school long before I did,” Zuck told the audience.

He recalled his decision to spend a summer in Palo Alto. After flying into San Francisco Airport, he rented a car to drive down the Highway 101. Aside from being impressed by the perpetually sunny weather, he was awed by the technology companies he spotted along the way.

At that time, Zuck said he was not convinced that Facebook would be a legitimate company.

“I thought it would be neat to be around some of these great companies,” he said. “One day we will find something [an idea] but surely this isn’t it.” Zuck said that he was honest with investor, Peter Thiel, that he did not intend to drop out of Harvard. Thiel called bullshit, and cut Facebook’s founders their first big check.

Zuck’s parents always knew he would drop out of college. He had the audience chuckling when he described a bet with his younger sister Donna on who would finish college first.

Still, the Facebook founder recommended that young entrepreneurs use their time in college to explore and develop new interests. He criticized Harvard for not encouraging innovation (this off-hand remark was met with boo’s from the audience), but admitted that this is slowly changing.

Zuckerberg was fascinated by the intricacies of the human mind, and the study of classical languages. However, he admitted that he was a keen programmer at college, and rarely studied or went to class.

The hacker-filled audience was in hysterics when Zuck told the story of how he aced an art history final. He coded a quick and dirty website with about 200 images, and emailed “the study tool” to the class asking for their thoughts on the significance of each image, which was filled with information in a matter of hours. “So you crowdsourced studying,” joked Graham.

This zeal for psychology has carried over into his work at Facebook. Zuck argued that Facebook is responsible for augmenting human relationships, and is not keeping us from developing friendships in the real world.

“Humans have the capacity to maintain empathetic relationships with about 150 people,” he said. “Facebook extends that.”