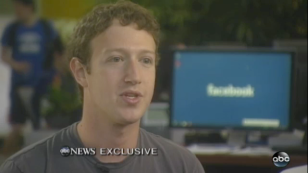 Mark Zuckerberg said that he was “quite sure” he didn’t sign any documents in 2003 that could have potentially handed over a majority stake in Facebook. He made the statement during an interview with Diane Sawyer on ABC World News today.

A lawyer for the company said yesterday that she was “unsure” whether Zuckerberg signed a web development contract with Paul Ceglia seven years ago, according to Bloomberg.

“If we said that we were unsure, I think that was likely taken out of context. Because I think we were quite sure that we did not sign a contract that says that they have any right to ownership over Facebook.”

Sawyer’s interview with Zuckerberg marks the day the social network passed a half-billion users. He said the company’s journey has been “surreal.”

“Back, you know, a few generations ago, people didn’t have a way to share information and express their opinions efficiently to a lot of people,” he said. “But now they do. Right now, with social networks and other tools on the Internet, all of these 500 million people have a way to say what they’re thinking and have their voice be heard.”

He also said that David Fincher and Aaron Sorkin’s forthcoming movie, “The Social Network,” about the history of the company is largely fiction.