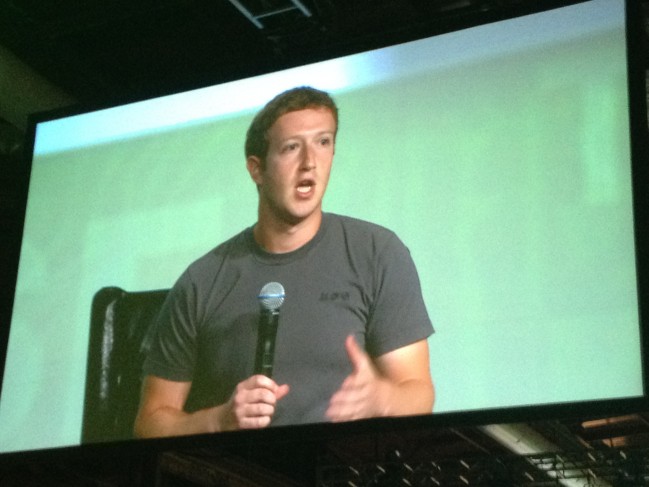 In his first interview since Facebook went public in May, CEO Mark Zuckerberg dares the audience to underestimate him.

While Facebook’s stock price may currently be at half of its initial offering, the company has a new mobile strategy and product developments in the pipeline that Zuck believes will precipitate an upswing in his company’s fate, he told TechCrunch founder Michael Arrington onstage at the TechCrunch Disrupt conference today. In fact, he welcomes skepticism as part of the lifecycle of a business and said it encourages risk-taking, innovation, and drive.

“We go through these waves when everyone in the world thinks we are awesome, and then there are times when people are super pessimistic,” he said. “I personally would rather be in the cycle when people underestimate us, it gives us the latitude to go out and take some big bets and do things that really excite and amaze people. I think a bunch of people are underestimating Facebook right now.”

Zuck has certainly met with criticism since Facebook’s rough IPO in May.

“The performance of our stock has obviously been disappointing,” he said. “But the main thing that is misunderstood right now is how good things are on different levels,” he said. “We have more users, more people using Facebook on mobile, and more engagement. Mobile users are more active, and the number of stories people have consumed on a daily basis has doubled.”

Mobile is clearly at the forefront of Zuckerberg’s mind and his business strategy. Since the IPO, a lot has changed. Facebook launched a new set of apps and announced iOS integration. The updated mobile version is faster, sleeker, and offers a better user experience. This positive traction could push the stock price up, and the refocus on mobile will build confidence in the company as a viable business.

“Over the next 3-to-5 years, the biggest question on everyone’s mind that will determine our performance is how well we do with mobile,” he said. “I basically live on my mobile device. The stats and my personal intuition say the energy and ecosystem are going towards mobile. To be able to integrate and help folks build great mobile experiences, that is the future.”

The Facebook mobile product was originally written in HTML5. Even though a majority of users engage with mobile Facebook through the web version, Zuckerberg said that betting completely on this language was the biggest mistake the company made.

“We realized we wouldn’t get the quality level we wanted, and mobile experiences out there are too good,” he said. “We wanted the highest quality level, and the only way was to go native. To be honest, even what we have now is not as good as it could be, but we made the decision to get it done as quickly as possible.”

Improving the quality of the mobile experience is critically important for user engagement, as well as for monetization. The trick is converting users into money. How to monetize mobile products is a question consistently tossed around the technology community, but Zuck believes mobile ads will generate greater returns than desktop ads.

“I am optimistic about monetization on mobile, because it is a lot closer to TV than desktop,” he said. “For the past 5 or 6 years, we have had right hand column ads. On mobile, that clearly is not the answer, there is no room. Mobile ads have to be integrated into the product, and they perform better. This is a multibillion dollar business.”

Now that the first iteration of native apps is on the market, the teams at Facebook will continue improving the design, functionality, and roll out new features. While making money is obviously a paramount concern, Zuckerberg said that his mission to “make the world more open and connected” is what drives him and his staff.

“What really motivates people at Facebook is building stuff they are proud of,” he said. “It is hard for people to wrap their heads around the idea that they are building something that 950,000 people are going to use. Facebook has not been an uncontroversial company in the past, and it is not like this is the first up and down we have ever had. This is a great time for people to join or stay on and double down.”

Arrington teased Zuckerberg about a Facebook phone being in the works, which Zuck denied. Rather, he said, he is dedicated to creating the best possible platform and product for users and developers. Adding a social layer to activities like listening to music, keeping in shape, and travel, not only helps developers distribute their products, but also gives people a social context for their lives.

The two discussed Facebook’s Instagram acquisition, and Zuck cited it as a case where a third-party company brilliantly made use of Facebook’s open graph and gained 100 million users. He told a simplified version of how the deal came about, but the underlying message is that Facebook wants to infiltrate, or at least apply, to every part of its users’ lives. Facebook handles a billion search queries a day and could be a powerful tool for answering everyday questions, like where to go for dinner.

Zuck said he strives for ubiquity and is quick to learn from his mistakes.

“Everything I do breaks, he said. “But I fix it quickly.”

The company may have lost massive amounts of money for its shareholders, but Facebook is woven into the fabric of our daily lives and is expanding into more areas and markets every day. It’s here to stay, and the money, that will come.