Google is helping tackle the last mile problem by partnering with Lime. Google Maps for Android and iOS has now gained the ability to show you nearby Lime scooters, pedal bikes, and e-bikes.

In July, Lime raised $335 million, including from Uber, whose app offers the scooters, and Alphabet’s GV. (For the initiated, Alphabet is Google’s parent company, and GV stands for the former name Google Ventures.) GV partner Joe Kraus is Lime’s COO and sits on its board of directors. And GV is leading Lime’s latest round, with Alphabet also separately participating.

Just like with Uber and Lyft, Google Maps’ Lime integration lives under the transit tab when you are navigating to your destination. If a ride-hailing option is available, you’re shown how long it will take to get to you and an estimated cost. If a Lime vehicle is available, you’ll see how long it will take you to walk to the vehicle, an estimate of your ride’s cost, your total journey time, and your ETA. 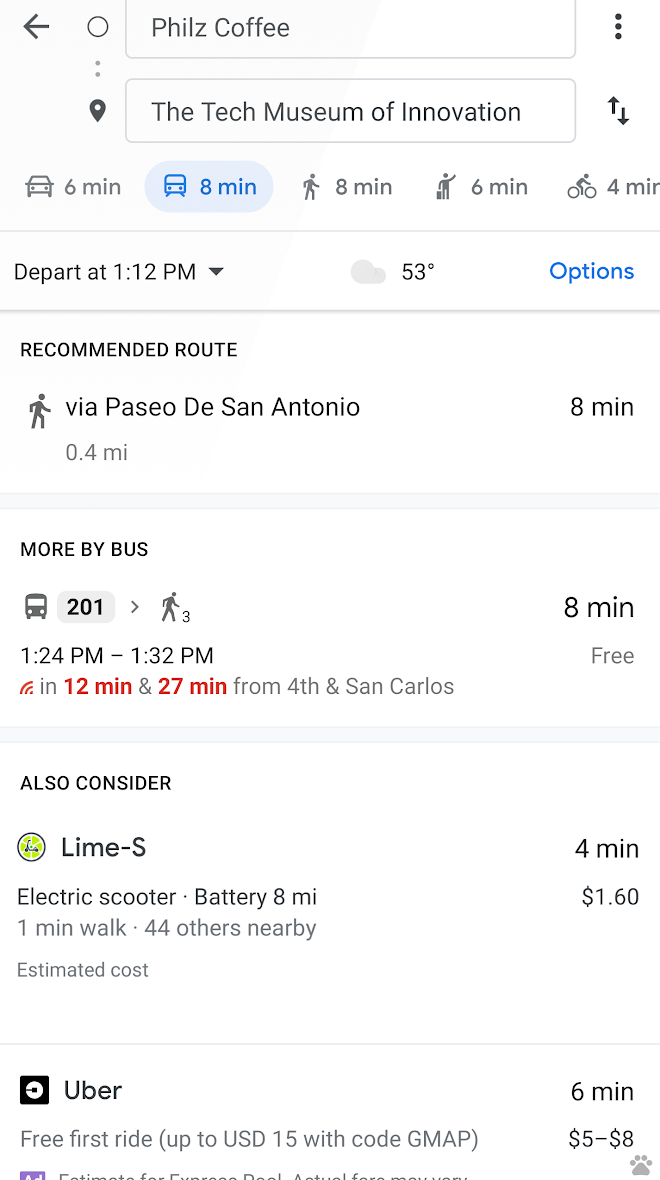 Tapping on the Lime card will take you right to the Lime app. From there, you’ll see the vehicle’s exact location and be able to unlock it. If you don’t have the Lime app installed, you’ll be taken to either Apple’s App Store or the Google Play store.

Lime in Google Maps is currently available in 13 cities around the world: Auckland, Austin, Baltimore, Brisbane (AU), Dallas, Indianapolis, Los Angeles, San Diego, Oakland, San Antonio, San Jose, Scottsdale, and Seattle. Google says more cities are “coming soon,” although it didn’t provide an exact timeline. But it did work in bad pun, touting the partnership as helping you “get to that meeting right on Lime.”

This is a big win for Lime, giving it exposure over all its competitors in the crowded scooter startup war. Lime should enjoy the lead for as long as it lasts — Google Maps added Uber integration in May 2014 and started adding alternatives a couple years later.

That said, Lyft shouldn’t get too comfortable with the Google Maps integration. In January 2017, Google updated Maps by giving users the ability to hail an Uber without leaving the app. In June 2018, Google Maps removed the functionality without explanation: “You can no longer book Uber rides directly in Google Maps.”

That is probably where Google wants to draw the line, regardless of how much it has invested in transportation companies (Alphabet has backed Uber, and Lyft as well). Google Maps can show you your various transportation options and information about them, but you’ll still have to open the corresponding app to book a ride.