Even our dumb, human-driven automobiles have dozens of electronic chips these days. And many of them are microcontrollers based on ARM’s low-power chip designs. But the world is changing, as cars become connected and smart enough to drive themselves.

Modern cars are so jammed with electronics that they can’t fit anymore. This is driving changes in the supply chain, as lead suppliers can’t supply just a point solution anymore, and vehicle subsystems may be controlled by more powerful, centralized chips in the future.

I caught up with Richard York, vice president of marketing for auto and embedded at ARM, the Cambridge, England-based designer of low-power microprocessors, to talk about these trends. ARM’s designs are used in billions of chips every year. But ARM isn’t satisfied with that, and it wants to get more of its designs into the cars of the future. 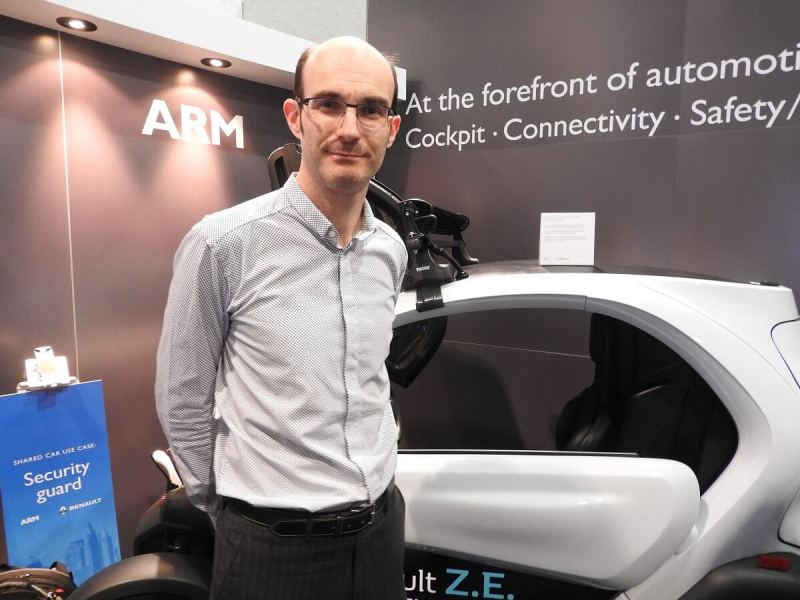 Richard York: I run the worldwide marketing team for automotive and embedded. Anything related to relationships with the car-makers or their direct suppliers. They’re a very important group of end customers. The whole automotive industry is going through massive change at the moment.

VentureBeat: Yeah, it’s a big year for change in automotive.

York: It’s a big decade for change. They’re only just starting. Some of the car-makers have really embraced what electronics can do for them. Some of the others are still starting to realize just how much electronics need to change things. It fundamentally has to change for many of the car-makers, because at the moment they do very little of this themselves. They push it all to their main suppliers. And yet electronics define 80 or 90 percent of the features in the vehicle. They’re leaving all the stuff that defines their product to their suppliers, in many senses, which is a bit of a dangerous position to be in.

Some of them have woken up to this. They’ve all woken up to some degree. Some have woken up properly, while some are still — I won’t say they’re in denial, but they’re still working out how to change the way they work with their supply chains.

VB: We’ve always heard that cars have dozens of microcontrollers, dozens of chips in them. Yet it seems like there’s a transformation happening as far as what’s in there. It’s getting a lot smarter. The computing power is going up. More connectivity is arriving. How do you view that transformation? What does that mean for this supplier base you just mentioned?

York: The amount of electronics is growing to the point where, in some high-end or premium vehicles, they can’t even fit any more. Physically there is no more room for those little silver boxes. Most of the electronics go in what’s called ECUs, electronic control units, a little silver box with a connector. A microcontroller, some analogs, motor drivers, whatever it might be.

In many cases they’re running out of space to put these things, because the conventional thinking was, “I have a function in the car that I want to sell to a buyer. Therefore I’ll put that function in a new box that I can provision on the production line, depending on whether the buyer ticked that box or not when he chose that vehicle configuration.” It may be less so in the states, but certainly in Europe, most vehicles are very heavily configured by the buyer. They go through a long checklist of this feature and that feature. Typically each one of those features maps to a little silver box hidden somewhere in the vehicle. But they’ve got to the point where there’s nowhere to put these things, no physical space, let alone power or cabling to wire it in.

VB: So single-function microcontrollers are giving way to general-purpose CPUs?

York: That’s what they need to do. Some of them are doing that successfully. Some of them are not doing that very successfully at all. If you think about it, that’s turning the supply chain on its head. In the past they’ve had a function, gone to a Bosch or a Denso or whoever, and said, “Here’s the function. Build a box to implement it.” Then that company would physically manufacture the module for them. If you turn it all into software — for a start, when you get software from many different suppliers all running on the same box, it interacts in strange ways. What happens if there’s a problem with the software? Whose fault is it? It turns the whole automotive supply chain on its head.