Hyperloop Transportation Technologies has delivered the first tubes to its research center in the southwest of France as it begins construction on its first Hyperloop network to carry people and freight.

The company expects to complete a 320-meter system that will go into operation later this year, and it will build out another 1-km network in 2019.

HyperloopTT announced last year that it was opening a European research center in Toulouse, France. Toulouse is the country’s fourth-largest city but also home to a number of transportation and aerospace giants, including Airbus. HyperloopTT began moving the tubes in yesterday, which created a buzz among spectators and local press.

“Five years ago, we set out to solve transportation’s most pressing problems: efficiency, comfort, and speed. Today, we take an important step forward to begin to achieve that goal,” said HyperloopTT CEO Dirk Ahlborn in a statement. “Hyperloop is more than just displays of rapid acceleration and more than just breaking speed records. The real opportunity is to create an efficient and safe system with an unparalleled passenger experience.”

Founded in 2013, HyperloopTT now has a team of 800 engineers and 40 corporate and university partners. The company is based in Los Angeles and uses an open collaboration model. People can “join” HTT and be compensated for their work with stock options. So far, HTT has raised $31.8 million, and it had 30 salaried employees as of last year.

In addition to Toulouse, the company has offices in several regions around the world where it has signed agreements for development and trial of Hyperloop systems.

The tubes being installed in Toulouse have a diameter of 4.0 meters, which means the system can be adapted for both passenger pods and shipping containers. The company hopes to have the passenger capsule — which is being built in Carbures, Spain — later this summer. 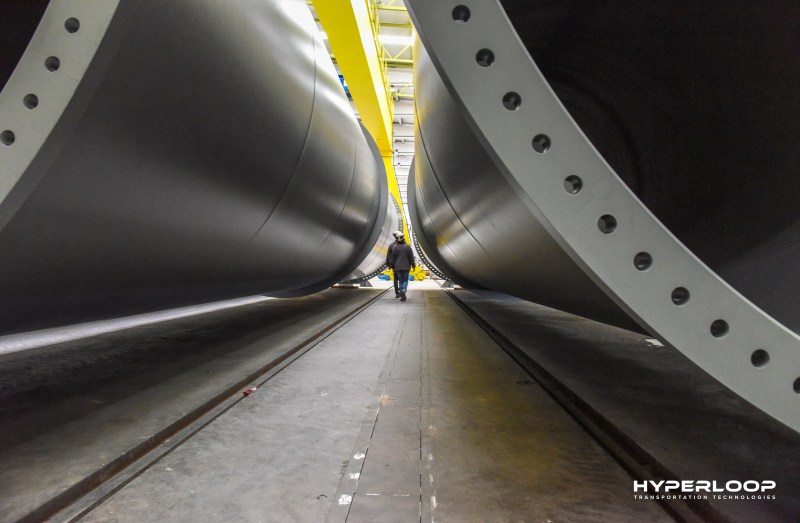 Of course, HyperloopTT faces several competitors as it develops its system. Hyperloop was a concept proposed and then open-sourced by Elon Musk. The idea is to put people or freight into capsules and use vacuum tube technology to propel them at close to the speed of sound over enormous distances. Another competitor, Hyperloop One, has also seized on this idea to develop a global transport system.

With a system now starting to take shape, HyperloopTT will be looking to see how quickly it can actually start moving humans and cargo. The result of upcoming trials will likely determine just how far off that reality is.

“Building in full-scale means we’re committed to innovation in the long-term,” said HyperloopTT chair Bibop Gresta, in statement. “We’ve pioneered the technology, proved feasible and insurable by the world’s largest reinsurance company, Munich RE.  We have agreements in place in nine countries where we’re working on feasibility and regulations. We have a research center for freight and logistics in Brazil and a facility in Toulouse where we’ll deliver the first full-scale passenger capsule. Hyperloop is no longer a concept, it has become a commercial industry.”