Delair today announced a significant investment from Intel Capital as the maker of fixed-wing drones seeks to rapidly expand its software platform.

Officials at Toulouse-based Delair said they could not reveal the size of the investment. However, sources close to the deal placed the amount in the eight-figure range. Founded in 2011, Delair had previously raised $14.5 million.

The company is best known for its fixed-wing commercial drones that have become increasingly popular in industries such as utilities, mining, construction, and agriculture. The drones are able fly beyond the line of sight, giving them a long-range and the ability to collect large amounts of data.

It’s this capability that poses both a growing challenge and an opportunity. According to Delair CEO and cofounder Michael de Lagarde, drone users are now trying to manage the growing volume of data collected. As a result, he said the company’s drone data analytics platform has become the fastest-growing part of its business.

“As the hardware is spreading and getting adopted, the added value shifts to the data processing,” he said. “Because at the end, what the customer wants is actionable business intelligence.”

The investment is the latest good news for a drone company that’s been on a roll.

Earlier this year, Delair was selected to be one of the Technology Pioneers for the World Economic Forum. The recognition as a Pioneer further boosts Delair’s international profile while making it part of a select group discussing issues related to the growing adoption of drones around the world.

In September 2017, Delair announced a major partnership with Intel. The companies said at the time that Delair would become the lead partner for the Intel Insight Platform — essentially, Delair’s drone software program would be sold by Intel as a white label service and co-branded between the two companies. 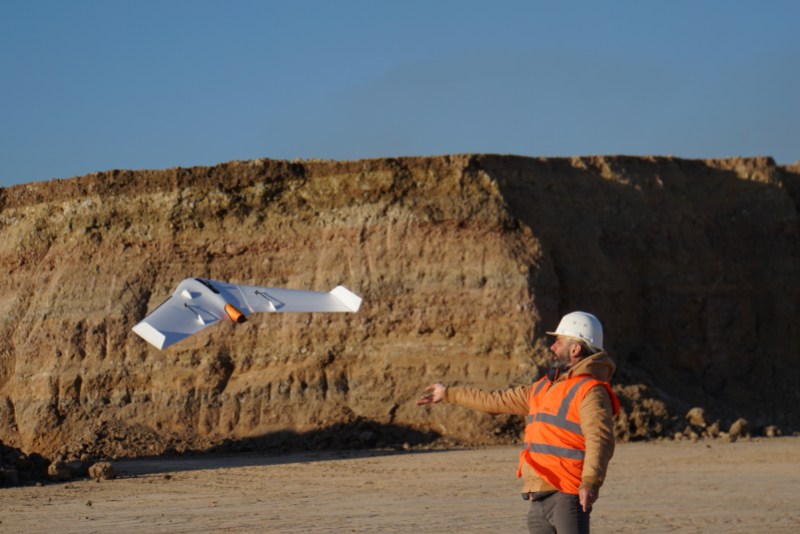 It’s that side of Delair’s business the new funding will target, de Lagarde said.

“The thing we are developing now is the software business unit,” he said.

Delair’s software platform enables data processing, visual analysis, and analytics that can be used to create 2D and 3D models, mapping, and reports. The platform can also pull in non-drone data from other sources to further enhance its analytic capabilities.

“This investment, built on an ongoing relationship with Delair, will help make aerial-based data collection and analysis an effective business intelligence approach for more enterprises. Delair and Intel are continuing to drive forward innovation and capabilities to enable a new level of digital transformation by customers,” said Anil Nanduri, vice president and general manager of the Drones Group at Intel, in a statement.

For the moment, drone sales make up the majority of Delair’s business. But de Legrande said he envisions software eventually overtaking drones. To that end, he said the company will double the more than 40 people currently dedicated to its software business out of its 130 total employees.