Lilium, the German aviation startup setting out to bring flying taxis to the skies by 2025, has added a further $35 million to its pot, taking its series C round of funding to around $275 million following the initial investment it announced back in March. A person familiar with the matter confirmed that this extension has now nudged the company into much-covered “unicorn territory, with a valuation in excess of $1 billion.

The latest cash injection was made entirely by Baillie Gifford, a Scottish investment firm that has previously backed companies including Tesla, SpaceX, Amazon, and Airbnb, and it comes at a turbulent time for the transport industry. The COVID-19 crisis has hit ride-hail services, with Uber having to adapt its business and put its vast transport network to other uses; meanwhile, scooter and bike transport investments have surged as cities reclaim roads from cars to make more room for pedestrians and cleaner personal transport. For a company such as Lilium, this transition could be congruous to its plans, though Lilium’s competition is more likely to be intercity transport such as trains and buses.

“If anything, the move to more sustainable modes of transport highlights the public appetite for a change in the way we travel,” a Lilium spokesperson told VentureBeat. “That said, our focus is not on offering journeys within one city, but rather connecting cities, towns, and villages with each other. With a range of 300km we’re able to connect entire regions, bringing high-speed connectivity to places that don’t have it, without the need for expensive infrastructure.”

Founded out of Munich in 2015, Lilium is building compact all-electric jets that take off and land vertically, with space for a driver and four passengers. This bypasses the need for expensive, space-consuming runways, and landing pads can be placed in any urban environment, including rooftops and quaysides. Customers beckon a ride through an Uber-style mobile app. 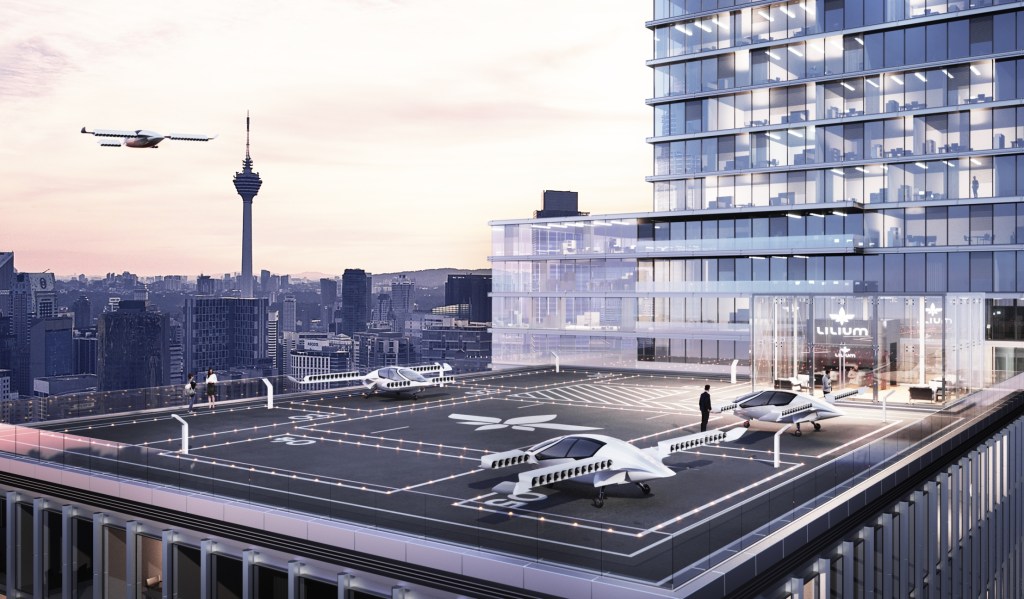 Moreover, given that Lilium’s focus lies squarely in local regional travel, this positions it well for a world where cross-border movement may be more frictional. This is particularly notable at a time when many companies in the aviation industry are on the brink of collapse.

Lilium said that it has managed to remain fully operational throughout the pandemic, with most of the company working remotely — and most of its key longer-term timescales remain unchanged. “We’re fortunate that we’re at a stage of our development where much [of our] work can be done from home, as it is focused on the development of our eventual serial aircraft,” the spokesperson said. “While COVID-19 will have some impact on timescales within this year, we remain on track for starting commercial operations in 2025. We also recognize that we’re fortunate to have significant funding secured, given the challenges facing the aerospace market at the moment.”

Other companies working toward a similar future include fellow German startup Volocopter, which recently closed a fresh $40 million investment, taking its total funding to $132 million, and touted a potential IPO.

With another $35 million in the bank, Lilium has now raised more than $375 million since its inception, and it’s well-financed to continue building its Lilium Jet and prepare for the “serial production” at its new manufacturing hub in Germany that it unveiled last year.