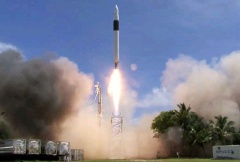 Elon Musk’s Space Exploration Technologies Corporation (SpaceX) has met with success on its fourth attempt to get a privately designed rocket into orbit.

SpaceX has now proven that a startup can replicate the success of huge efforts made by the United States and Soviet space programs in the 50s and 60s. Legacy technology from those early space programs still helps send satellites and space crews out of the atmosphere today, but the company hopes to undercut those rockets with a far cheaper design.

Three previous attempts for SpaceX went awry, with the first launch attempts beginning in March 2006. Despite the failures, the company kept trying, with backers The Founders Fund — run by some of Musk’s co-founders at PayPal — loading $20 million more into the venture two months ago.

The next challenge for the company is to prove, with a 1-3 record, that its rockets are reliable. The first cargos they will carry will be satellites and other expensive, but replaceable items, but eventually SpaceX hopes to carry tourists and astronauts up.

This first successful launch is also good news for a few other companies, including GeoOptics, a satellite startup hoping to use SpaceX rockets to privatize weather data.
[youtube=http://www.youtube.com/watch?v=eGHWheEM-ww&w=425&h=344]