Cars and trucks will eventually adjust to their surroundings in ways you can’t even imagine yet. When cities implement a car traffic control center, autonomous vehicles adjust their speed automatically to eradicate congestion even miles up the road based on real-time driving patterns, and an “accident” means only that a kid broke their toy in the backseat, we’ll know there are finally enough sensors in the roads, on cars and trucks, and everywhere else to assist us on a daily commute.

For now, trucks like the RAM 1500 Night Edition Crew Cab 4X4 use technology that lets you make adjustments to ride height as a way to conserve fuel — and encourage a little fun and excitement. Recently, I tested one in Northern Minnesota driving through a massive mud pool to find out how the height adjustment works, both inside and outside of the vehicle.

The 1500 is one of the only vehicles I’ve ever tested that lets you push a button on the keyfob when you’re standing outside of the truck to lower the height.  The result is a bit like climbing into a car, low enough that I didn’t need to grab a handle. Inside, you can raise the truck so that you avoid scraping the underside on curbs or rough roads using a button near the center console. When you head out on the highway, the vehicle adjusts the height for you automatically to gain better MPG due to improved aerodynamics. (RAM Trucks says there is a 6 percent gain in aerodynamics due to the Active Air Suspension tech and the overall design.)

I pressed a button to raise the truck a bit higher. As it adjusts, you can spot a stationary object in the distance and see that you are actually rising. If you disembark, you can tell the vehicle is noticeably higher off the ground, which helps you avoid a common issue of hitting a log or a large rock when your truck climbs a mountain pass… or drives through mud.

Once I had the truck height positioned, I gunned it through a puddle that had at least a six-inch drop. Fortunately, that depth barely made the truck drip at all. As mud sprayed everywhere — drenching someone filming with an iPhone in slow-mo (sorry) — I realized this is one of the advancements that will be standard on cars and trucks in the future. Every vehicle will adjust on the fly to dips in the road, curves, wind gusts, and more. (Mercedes-Benz and Land Rover already use similar tech.) After that, cars will adjust even more — maybe softening the seat a bit when you drive over gravel, emitting a warning siren when you take a really close corner on a single-lane road, or sending a quick signal to the car behind you to stop when you see a deer approaching.

Most of the advancements are not rocket science. The sensors and software are already in use. What needs to change is the environmental variables. Cars don’t quite know there’s a puddle with a six-inch dip in the road ahead. They could — if other cars noted the condition and let every other car know, or if the Internet of Things was much more widespread. Every traffic light could send out a signal to every car, not just the Audi models that support this and not just in Las Vegas. For now, I’m impressed with how the RAM 1500 knows when you start driving on a highway. And that it barely noticed the massive pool of mud that would stop most cars. 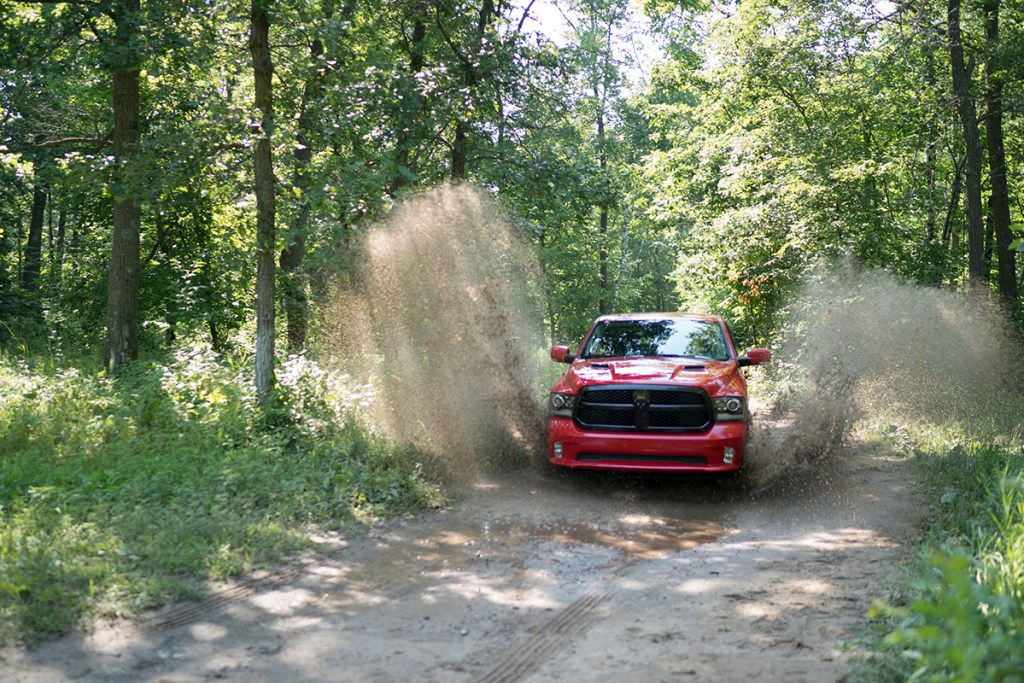 Above: Set to a higher suspension, the RAM 1500 destroyed this mud puddle.