This takes Voi’s total raised to $135 million, and follows its $50 million series A round last November and $30 million follow-on tranche five months later. It’s worth noting here that Voi ended up not drawing down $32 million of its series A round due to the terms of the investment, which is why its total raised so far is lower than it would otherwise seem.

What’s perhaps most interesting about Voi is that it has previously said that it has already reached profitability in some of the cities it operates in, which runs contrary to the popular narrative that shared mobility transport endeavors are unsustainably expensive and rely too much on big VC bucks. Voi hopes to buck this trend, and said its latest cash injection will position it to build an even more profitable business across all of its markets. The company believes it may reach overall profitability without having to raise any more money, and central to this endeavor will be building durable scooters that can last nearly two years.

“Last August, we said that our cities Stockholm and Oslo were profitable,” Voi cofounder and CEO Fredrik Hjelm told VentureBeat. “We are on track to achieve this in more of our cities, and that is our aim. At this point, a key focus for us is to ensure we continue to increase the lifetime of our escooters, forge key partnerships, and continue to work in those cities which provide the best conditions for a profitable escooter business. Key to achieving strong business unit economics is how long our escooters last. The new V2 ones should last longer than 18 months, which means that we should be profitable before any future raises.”

As with the countless other e-mobility transport options out there, Voi first asks users to download a mobile app. Here they can find the nearest available scooter, scan a QR code, and pay just over $1 to unlock it. 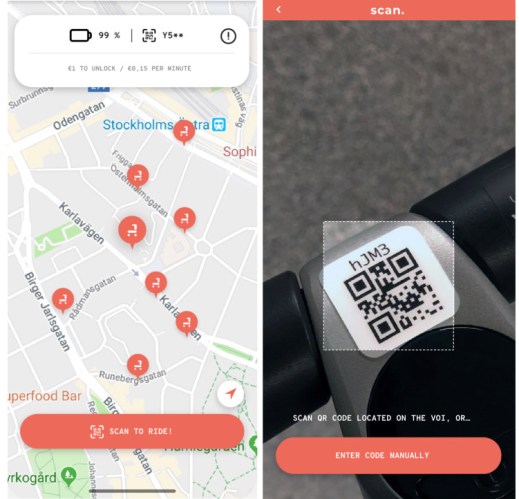 Voi first launched in its native Stockholm last August, and the startup has since expanded to dozens of cities across Europe, with 4 million registered users currently to its name. Rather than dumping hundreds of its scooters on unsuspecting cities, Voi is setting out to win the affections of municipalities with a more permission-based approach.

“There’s been a huge demand for Voi’s escooters from residents across Europe in the last 12 months, but making a landmark change to transport in Europe takes more than simply flooding cities with thousands of scooters,” Hjelm said. “We are developing a long-term business that gives people a new way of moving around cities that’s clean, fast, convenient, and also fun.”

If electric scooters were one of last year’s big breakout trends, 2019 has been shaping up for more of the same. In the past month alone, Berlin’s Tier Mobility raised $60 million, while Santa Monica, California’s Bird secured another $275 million at a $2.5 billion valuation. A few months earlier, Europe’s Wind Mobility, which also deals in electric scooters, scored $50 million.

The escooter drive fits into a broader narrative incorporating all manner of urban mobility transportation, which has seen Uber recently add electric mopeds to its transport options. And last month Los Angeles-based Wheels closed a $50 million round of funding to build electric bikes focused on safety and durability.

Against this backdrop, Voi has now secured its third tranche of funding in a year, with Vostock contributing to all three rounds.

“Voi is only at the start of developing micro-mobility based on Swedish values right across Europe,” Vostock New Ventures CEO Per Brilioth said. “In Germany, in particular, there is a huge market to go for. We are excited that this additional funding will enable the company to introduce a new generation of escooters that are clean, good-looking, and safe, enabling people to get around the cities they love quickly and easily.”