My job (I’m on the marketing team of a custom mapping company) involves keeping a close eye on the transportation and logistics industry. And over the last six months, I’ve seen a surge of change in that industry — a wave of new “micro-mobility” options such as bike- and moped-sharing services. Yes, these services are big in China. But the upsurge I’ve witnessed lately is in my own city, San Francisco, and the place I frequently go to for work, D.C.

We’ve seen Jump Bikes launch in SF. Bird, Lime, and Spin all launched scooters in SF and DC. And Skip scooters also launched in DC. And, looking a bit further back, every one of the other dockless bikes launched in DC last September (Lime, Spin, Mobike, Jump, and later Ofo).

This fast growth, along with the continued growth of ride-hailing services, indicates we’re approaching a tipping point for car-ownership alternative transportation.

In the last two years, new modes of transportation have exploded in cities around the world. Twenty million dockless bikes in China, thousands of electric push scooters plying the streets (and sidewalks) of Los Angeles, dockless e-bikes in Washington DC, motor scooters across Europe. Some argue it’s a venture capital-funded bubble. Some see it as a public nuisance. Others speculate it will significantly decrease car ownership rates.

Whatever your view, these bikes and scooters are competing to fill a very real transportation gap: the first and last mile problem. This isn’t a new problem, but what’s different is the combination of lightweight and cheap IoT-enabled vehicles plus location-aware smartphones. For urban dwellers, the emerging promise of affordable door-to-door transport is compelling, but is it sustainable?

When I talk about the first/last mile problem, I’m referring to traveling very short distances — a few miles or less — to get from your origin or destination to or from the nearest transportation hub. A common example is walking 10 blocks to a train station or transferring between buses.

Over 60 percent of trips are less than 5 miles in length, according to the National Household Travel Survey — just the kind of distance a bike or moped is prime for.

Scooters, bikes, and other personal transit offer consumers low prices, predictable speeds in cities (often faster than driving), and on-demand availability — a compelling alternative to bus transfers, pricey ride-hailing services, and long walks. From a transit planner’s perspective, there are two major benefits: flexibility and data. A fleet of scooters can be deployed in hours by a small crew, requiring minimal maintenance and no infrastructure changes. These vehicles are also GPS-enabled, meaning they can provide mobility data at scale in areas where it was previously unavailable.

In China, the share of overall trips on bike has doubled from 5.5 percent to 11.6 percent since the launch of dockless bike systems, while overall congestion in Beijing, Shenzhen, and Guangzhou dropped by 4-7 percent. In Beijing, Mobike strategically deployed bikes to decrease the number of people living in “transit deserts” (further than 500 meters from a subway station) by 40 percent.

Above: Left: The gap in public service. Center: The position of Mobike. Right: How Mobike fills the gap.

In the City of London, bikes are now the dominant vehicle during rush hour, and congestion has fallen over 40 percent since 1999.

In the US, Lime reports that its top urban markets see 40 percent of trips starting or ending at public transit hubs in addition to contributing to an overall 25 percent increase in bike share trips in 2017. A recent Virginia Tech study revealed that dockless systems in Washington DC have increased access to lower income people, racial minorities, and women compared docked systems.

Still, with the exception of China, micro-mobility services remain at low density in most areas, resulting in a degraded customer experience. While the number of competing services/apps continues to grow, the numbers of vehicles are being constrained in some markets by city governments (Austin and SF to name two), so the number of actual vehicles is not as high as the use rates suggest they could be. Cities are concerned that, if they don’t keep a cap on the total number of these vehicles, bikes and scooters will overwhelm infrastructure or be abandoned by defunct startups. This comes alongside reasonable regulations about parking, safety, minimum age of riders, etc.

Many of these startups view regulation favorably, but the caps limit adoption for any one provider. Bird scooters proposed switching to a use-based permitted number of scooters, but that idea hasn’t taken off yet in any city. 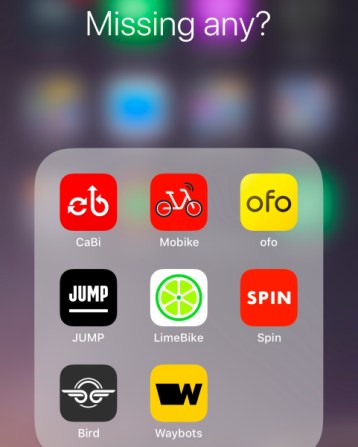 A single app connecting users to the best forms of transit is more efficient. This already has a name: Mobility as a Service (MaaS). It should direct users to bikes and scooters for under ~3 mile trips and to public transit, car-sharing, and ride-hailing for longer distances. All options must be easy to purchase. This likely means acquisition or failure for the scrappy micro-mobility startups. But who will lead the charge? 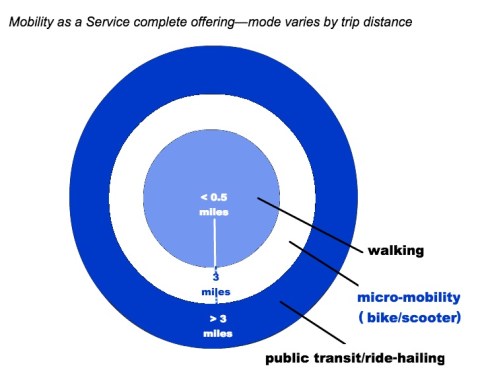 Global ride-hailing companies, which include to the likes of Didi Chuxing (which is offering Ofo and Bluegogo dockless bikes directly in its app, and ultimately bought Bluegogo outright), Uber (which bought JUMP and has partnered with Masabi, a public transit payments company), and Grab (which recently integrated bike-sharing services from services like oBike and GBikes).

Automotive OEMs, like Ford (which is building out a Smart Mobility division and has made industry acquisitions of Chariot, Autonomic, and Transloc), Daimler and BMW (both of which invested in and recently announced the merging of their ride-hailing/car-sharing businesses), and GM (which is entering the car-sharing market with Maven).

While other players exist, like public transportation alternatives Bridj and RidePal, and trip planners/aggregators MaaS Global and CityMapper, their roles are narrower.

Still, despite all the movement, it’s early days for micro-mobility services, and they face major risks like heavy regulation and unprofitable business models. What is clear: People will be big winners, gaining back wasted time and breathing cleaner air.

(Note: The views expressed here are my own and do not necessarily reflect the views of my employer.)