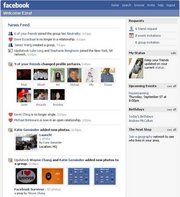 Facebook has just made two big changes. Facebook’s Ruchi Sanghvi has blogged about it here.

First, Facebook has released “News Feed,” a feature that that appears on your homepage to let you know what is happening in your social circles. It pulls in the latest information about your friends or other contacts, notifying you for example when your secret crush breaks up and becomes available for dating again.

Second, it has released “Mini-Feed,” which appears in each person’s profile. This is for when you visit other peoples’ pages, and just want to know what they have changed recently (notes, photos, etc). As opposed to “News Feed” which is pulled into your page, “Mini-Feed” resides only on the pages of each individual member. You can remove the updates, if you don’t like them.

These features seem to be pretty useful, but they are really only update mechanisms. They seem consistent with Facebook chief executive Mark Zuckerberg’s penchant to restrain members’ freedom on how their profiles look (which, btw, can be a good thing, if you consider the ugly, unreadable MySpace pages you see sometimes).