Have you ever searched for product reviews online at and come away unsatisfied?

We have. Sometimes we can’t find reviews for a niche product. At Amazon for books, or at Yelp for restaurants, we often get that sneaky feeling a reviewer is biased (written by a friend of the author, or owner). And for cameras or computers at CNET or Yahoo, we’re not sure whether the revenue is targeted to an expert, or beginner. We’re dependent on the reviewer, and don’t know what the masses think.

Enter Buzzillions.com, a new site that claims to rectify these shortcomings. Judging from its stated traction, it is on to something.

Buzzillions gets its reviews from retail clients of its parent company, Power Reviews, a two-year-old Millbrae, Ca. company. Power Reviews gets the reviews in return for offering retailers technology that helps generate reviews. Each retailer sends out a survey after a purchase is made, asking the buyer to rate their product, and to provide other information. If they bought a camera, for example, they’re asked whether they are a beginner or expert photographer. These products are then put on Buzzillions. This way, a person surfing reviews at Buzzillion can search for reviews written people that match their own interests.

See below for partial screenshot. Note the users get to “tag” a product with certain words, and list pros and cons.

Buzzillions makes money charging retailers for the traffic it sends back to them when people click through to products after reading reviews. It charges either by CPC or CPA.

Over four months of testing, Buzzillions.com has generated more than 140,000 reviews on 45,000 products, covering primarily digital cameras, sporting goods, footwear and concerts and theater events. Its customers include Ritz Camera, Abt Electronics, Smart Bargains, Mountain Gear, Journeys. By year end, it expects to double the number sites it pulls reviews from, chief executive Andrew Chen said in an interview with VentureBeat. The company released a launch statement Sunday evening.

By targeting actual buyers with surveys shortly after purchase, Buzzillions’ retailers reach buyers when they are still in a cooperative state in mind. This contrasts with Amazon or other review sites, such as Epinions, where there is little incentive for users to fill out review.

Most retailers have an incentive to maximize the number of reviews they get–even if some are negative–because the assortment builds trust. Studies show that customers are more likely to buy at a site when they see both positive and negative reviews (they’re assured they’re not getting snowed). While Epinions collected two million reviews in eight years, Buzzillions will get a million reviews in a year, Chen said. By also catering to specialty retailers, Buzzillions has a wider a selection of reviews.

Other competitors include comparison shopping engines, such Shopping.com and Pricegrabber.com, which are introducing widgets for their retail partners to collect reviews, though still elementary. Become.com scrapes the Web for reviews, but it collects from everywhere: Some reviews are three stars, others have five, others none, so it has difficulty creating a unified feel. Google could enter the market. Amazon has added product wikis, and expanded reviews.

The company raised $6.2 million from Menlo Ventures and Draper Richards in December 2005, and will be raising another round in July.

Tomorrow, Buzzillions will introduce a feature that lets people add a review to their own blog. 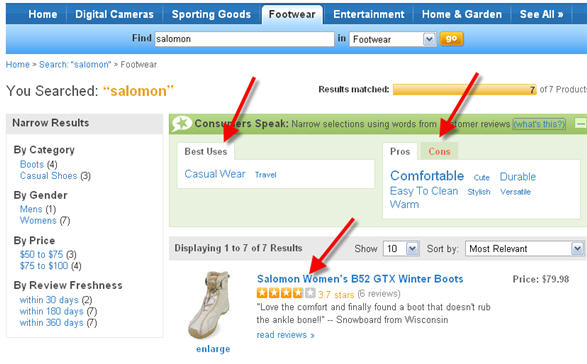