Reunion is a social networking company that looks decidedly old-fashioned, compared to glitzy (or garish, some would say) sites like MySpace.

And yet its simplicity, like that of Facebook, is apparently part of its success. It now has 28 million registered users, and is adding one million users a month — and by that measure, it ranks among the top five social networks (Facebook, by contrast has slightly more than 19 million registered users). That’s why Reunion has just scored $25 million in venture capital from Oak Investment Partners, in what is the largest first round of venture capital any social network has received to date.

So why have you never heard of it?

Launched in 2002, Los Angeles-based Reunion is far more retro than Facebook. It shrugs aside the sexy “widget” doodads popularized by companies in Silicon Valley — and has slogged away through the years quietly, without marketing hype or verve. Reunion targets the 25 and older crowd. When you register, it provides you a straight-forward profile page, and then lets you add a range of information about yourself (bio info, favorite movies, character descriptions, etc). At its simplest, you can add your friends, and then stay in touch with them — as the name “reunion” would suggest. No video sharing or anything. Plain-vanilla stuff. See screenshot below. Many of its 28 million users registered years ago, and aren’t that active. However, it has about eight million unique users a month, which comfortably places it among the top ten networks.

Yet its new users — because they are older — are far more profitable than users at younger sites, such as MySpace, says chief executive Jeff Tinsley. Reunion brings in revenue of more than $30 million a year, though he wouldn’t be more specific. Cyworld, the raging popular Korean site, has said it makes $2.10 revenue per users, and Reunion makes much more than that on its recent users, Tinsley said. “It’s interesting, we don’t get covered nearly as much as these other guys,” Tinsley said.

One source of Reunion’s traffic is the “people search” technology it offers to other sites. It powers people search for AOL, Infospace, and Lycos, and will announce another big deal in two weeks, he said. People search is becoming more popular, and it will soon “bubble up” to become a staple feature at the top of most major sites, Tinsley said. Reunion powers 60 million people searches a month.

Reunion’s second largest outside investor is Richard Rosenblatt, former chief executive of Intermix, the parent company of Myspace. He joined the seed round, though invested less than Tinsley himself.

Reunion makes money from advertising. But it is more aggressive in pushing its premium services, charging between $3 and $5 a month to do things like contact people once you’ve located their profile pages, or to be able to see who is searching for you. You have to pay to see people’s full profiles, too.

We wonder how long it will be able to charge people for this sort of thing, given that sites like Spock (yet to launch, albeit), MySpace, Facebook and LinkedIn are increasingly giving you ways to reach people, and stay in touch with them, for free.

Reunion is using state of the art marketing tools: When we decided to leave the Reunion site, a box popped up and asked us to wait, and a woman named “Jenny” started IM’ing us in a chat box (see screenshot at bottom) asking us if we were sure we wanted to leave, and plugging Reunion’s premium services. 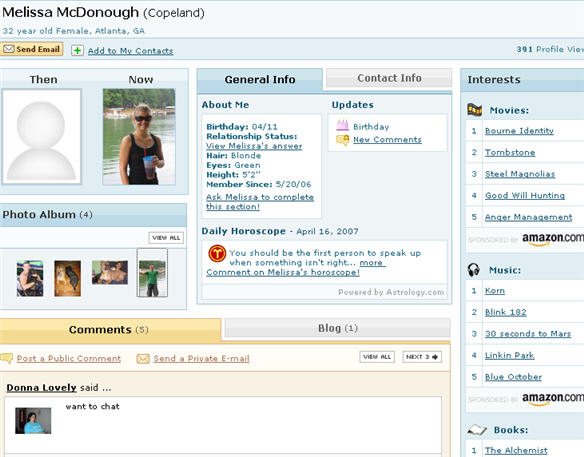