Most video advertising dominates your screen: Ads blast you for a few seconds, either before or after a video plays, or even during — so-called pre-roll, post-roll and mid-roll ads, respectively.

Adap.tv’s technology is similar to that of Videoegg, of San Francisco. The ads show up discreetly within a video while it is playing. Adap.tv says it will differ from Videoegg by focusing solely on ads (Videoegg also powers video for social networking sites, and began advertising as a side business).

Adap.tv’s ads run on different portions of the screen, pulling them in based on the content that is on the screen. 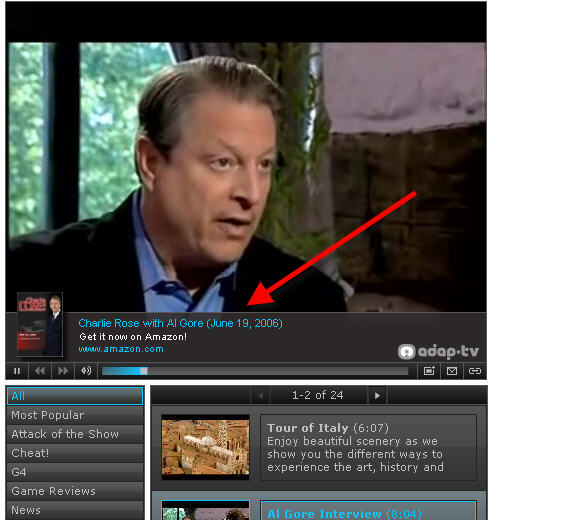 So for example, in a video interview with Al Gore, you might have ads running along the bottom that offering other related products, for example: Al Gore’s interview with Charlie Rose last year, which you can get on Amazon.com (see screen-shot).

While the ads are supposed to be less-intrusive, some producers will use the technology in addition to pre-roll and other ads, so that you are bombarded with ads relentlessly (indeed, see this example of an Adap.tv video about DVDs, where the content is essentially one big advertisement).

Here’s how it works: Adap.tv analyzes the video for things like meta-data (classification tags that producers or others have given it; in this case, a producer would tag it “Al Gore,” for example), and use speech recognition to figure out what Gore is talking about, so that if it is about global warming, Adap.tv can run an ad for an environmentally friendly product. Finally, Adap.tv measures how viewers are responding to ads. If viewers respond favorably to eco-friendly product ads by clicking on them, for instance, it may serve up more of those ads.

The company also announces a partnership with video site Metacafe. Metacafe, one of the larger destination video sites after YouTube, will use Adap.tv’s advertising for in-video ads. Metacafe will use other platforms to run pre- and post-roll ads, however. Metacafe splits the ad revenue multiple ways, giving a sliver to Adap.tv, another sliver to the post and pre-roll providers, yet another to the video publisher, and finally, keeps a portion for itself.

The publisher of a video simply pastes 12 lines of code into their Flash player. This code then automatically requests ads from Adap.tv’s servers and places the ads in the video. The default is two ads a minute, though the publisher can choose whether to run them more or less frequently. While it supports only Flash 8 and 9 players right now, Adap.tv will be able to serve ads to other platforms soon.

Adap.tv was founded by Amir Ashkenazi, co-Founder and former chief technology officer of Shopping.com. It has an undisclosed amount of backing from Gemini Capital.

Update: Scanscout, of Boston, is doing something similar, though we haven’t had time to see how it compares. General Catalyst Partners has just invested a $7 million first round of capital into the company. (See announcement and details)

Update II: When it rains it pours. YouTube is testing some in-line video ads, though if you look at Liz Gannes’ piece, you’ll see the ads are actually videos, and so quite disruptive — different animals altogether.